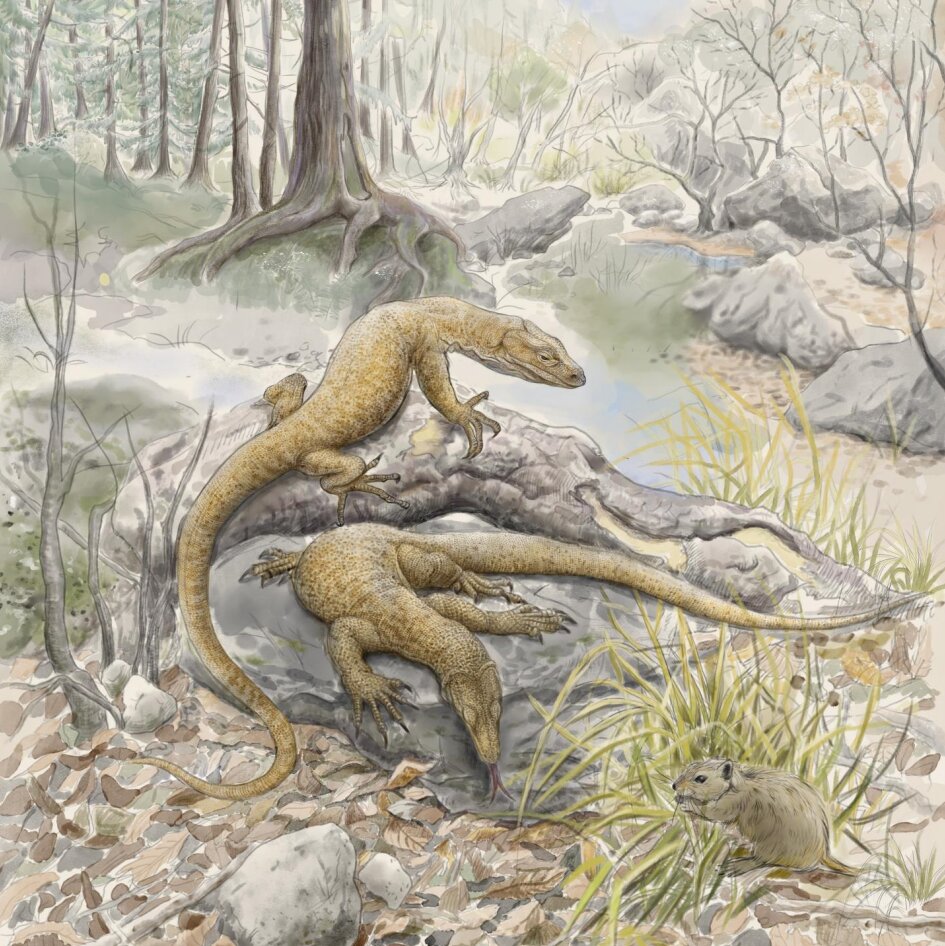 A study based on a new fossil species of varanids from China shows that the transition from ancient Varaniformes to Varanus occurred in Asia and supports the Asian origin of Varanidae.

The study was published in Philosophical Transactions of the Royal Society B February 7. It was conducted by researchers from the Institute of Vertebrate Paleontology and Paleoanthropology (IVPP) of the Chinese Academy of Sciences and their collaborators from the United Kingdom and Switzerland.

The lizard family Varanidae, whose Chinese name literally means giant lizard, is one of the most successful groups of lizards. Its single extant genus Varanus includes more than 80 living species currently distributed across Africa, Asia, and Australia, along with a few close fossil relatives.

However, the origin of the genus Varanus has been the subject of great debate, with Asian, African and Gondwanan hypotheses proposed. The first definitive fossils of Varanus come from the early Neogene.

Bridging the gap between the Upper Cretaceous and the Neogene, the Paleogene is then the key period of the transition from Varaniformes to Varanus. However, the only well-represented fossils from this key era are the Saniwa skeletons from North America where Varanus does not currently exist, thus further obscuring the evolutionary history of the Varanidae.

The new varanid fossil from China, Archaeovaranus lii, was excavated by a research group led by Professor Wang Yuanqing of the IVPP from the Lower Eocene of Liguanqiao Basin in Hubei Province in 2008.

Archaeovaranus was about a meter long. It shares many features with Varanus, such as its elongated snout, intramandibular joint, and precondylar constriction, but it also differs from Varanus in its open subolfactory canal and orbit, palatal teeth, and a lesser degree of coracoid fenestration.

What is most characteristic of Archaeovaranus is the similar length of the fore and hind limbs (not counting the manus and pes). In contrast, the hind limb of Varanus is obviously longer than its forelimb.

Such a body proportion suggests that Archaeovaranus employed specialized locomotion at least different from that of contemporary North American Saniwa. The individual Archaeovaranus represented by the fossil had matured sexually at age five and died at age 16.

Archaeovaranus also highlights the evolution of some food-related characters within the Varanidae family. From stem varanids to Varanus, opening the orbit increased feeding efficiency, while closing the subolfactory canal helped counteract the increasing stress created by opening the orbit. Meanwhile, retention of palatal teeth in Archaeovaranus suggests a complicated history of tongue function, from prey transition in other lizards to chemosensation in Varanus.

Provided by
chinese academy of sciences

This document is subject to copyright. Apart from any fair use for the purpose of private study or research, no
any part may be reproduced without written permission. The content is provided for information only.

The global biological control market is expected to grow by USD 2.00 billion during the period 2022-2026, growing at a CAGR of 12.52% during the forecast period

Veolia and Braskem will develop a eucalyptus biomass project in Brazil