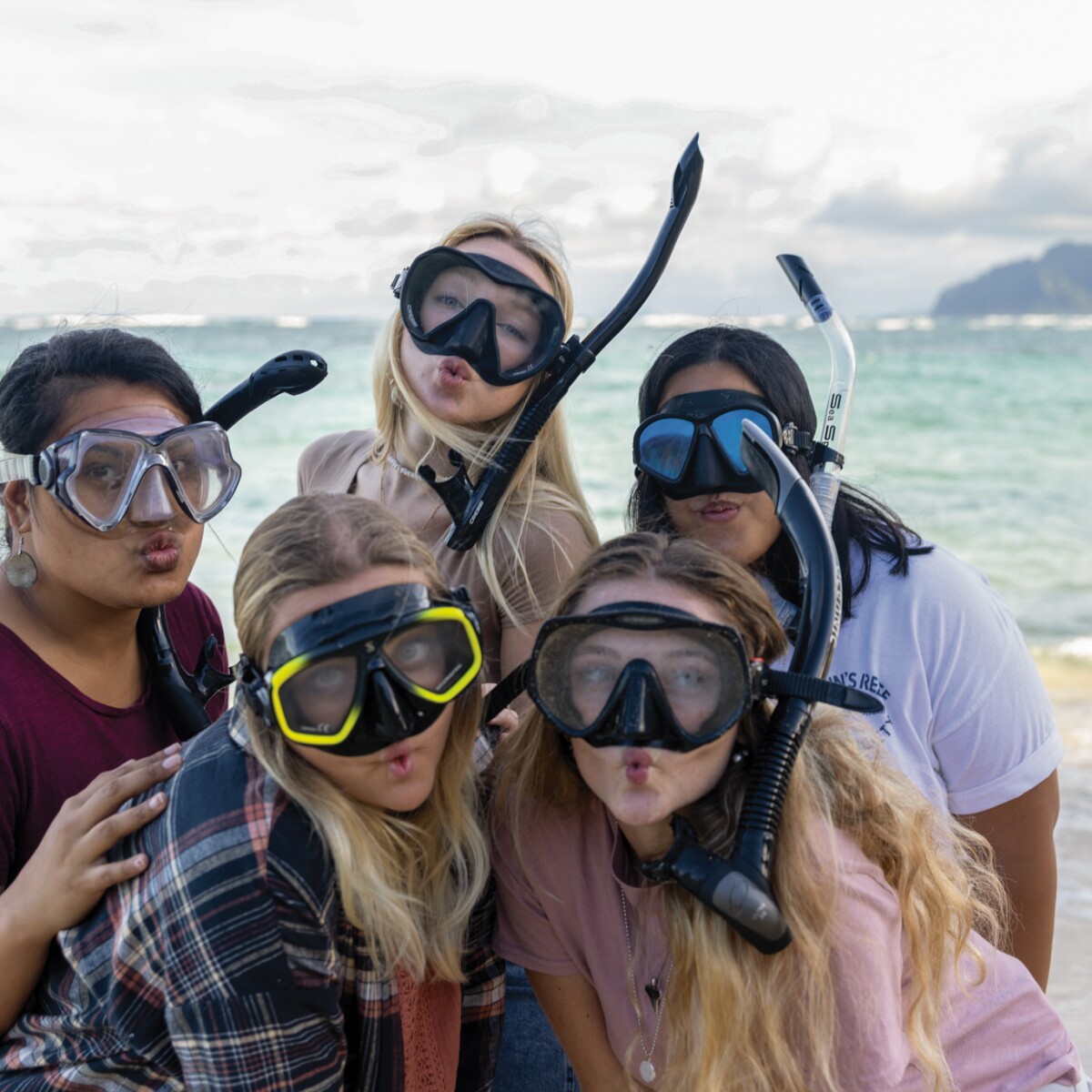 Although STEM fields are male-dominated, women outnumber men in the marine biology program at BYU-Hawaii


Marine biology is precisely “one of the exceptions [in the STEM field] where there’s a really strong female presence…which is great, you feel so empowered,” said Emmalee Moore, a marine biology student from Seward, Alaska.

Moore, along with four other marine biology students, said there is a strong female presence in the marine biology program here at BYU-Hawaii. In BYUH’s marine biology major, female students outnumber males. This is very different from most STEM fields in the United States.

According to a 2019 survey of the American community by the US Census Bureau, the national average for the STEM field is made up of 26% women and 84% men. However, this is not unique to BYUH. According to the Career Explorer website, 69% of marine biologists are women and 31% are men.

Moore said she thinks there are more women studying marine biology because for women there is a “nurturing connection to the environment, especially marine biology. There are certainly many emotions associated with [nature] too, which I think is a huge strength.

J Ungos, a junior from Melbourne, Florida, majoring in marine biology, said: “Women are on a different level of passion for nature.” She added that women are more caring and want to see the environment taken care of.

To further explain this, Luckaia Strand, a senior marine biology major from Cedar City, Utah, said, “I feel like naturally we have a very nurturing side to us as women, and i think we have a love and care for the planet and animals.

“What Moore noticed is that even though there are a lot of women in the field of marine biology, sometimes it seems like men hold most of the leadership positions in this field. Ungos agreed. her internship at Brevard Zoo, she noticed that the curators and directors were all male, although the wardens were almost half female.”It was very male-dominated,” she said.

However, Ungos explained that she never felt disadvantaged as a woman attending BYUH. She said she felt a camaraderie with the other women in the program.

Cayden Eliason, a junior majoring in marine biology and biology education in Howard, South Dakota, said, “It’s interesting to see how society and history have come and told [women] that we’re not as smart or capable as men, when in reality we just haven’t had a chance to show it because we had to stay home. She said now women have more educational opportunities.

For Eliason, however, while attending BYUH, it hasn’t been a competitive environment but “a very collaborative one,” she shared. Eliason explained that each student has their own specific passions that they want to pursue and that they “all work together” to help the ocean.

For Strand, she said she felt disadvantaged and neglected while studying science in high school, but not while studying at BYUH. She said here that she felt “very empowered. “For Moore, those working in marine biology have had to deal with ‘much less sexism than in other fields.’ Moore said she has had to deal with little sexism in her field, but it is always good for everyone to be aware because sexism still exists.

Some organizations are trying to help address this problem, such as Women in Ocean Sciences, a non-profit organization whose goal on its website states: “Supporting women is protecting the ocean – we are building a movement international community to raise the voices of women working to protect our marine environment.

Filipino, Ungos is part of an organization called Minorities in Shark Sciences, which “offers many opportunities, including scholarships or paid experiences,” she explained. Another of the most powerful students is Anameere Tennaba, a senior student from Kiribati studying marine biology. She shared her intention to return to her country to educate her people about their main resource, the ocean. With fishing being their main source of food, she said she wanted to go back and enforce fishing laws.

Studying here “opened my mind to see that we as people don’t have to destroy the ecosystem and biodiversity,” Tennaba said. “We just need to know our limits in catching fish.” She said she wanted to educate people about the species and overfishing. “They tend to take any size fish,” she said.

As an IWORK student, she said she was very grateful for the scholarship because her parents could not afford her education. She said she liked the teachers she worked with. Tennaba had the opportunity to do a research internship on deep-sea animals in the Pacific, while she was on a boat for six weeks. She never got seasick all the time because her father was a fisherman, and “instead of taking a bus, you take a boat,” Tennaba said.

Growing up in Kiribati and her experience there helped her decide to pursue her studies at BYUH in marine biology. She shared during her internship that she learned that the sea can be used for more than food. The ocean offers many medicinal benefits.

Strand said she has always loved the ocean. Her parents called her a fish because she spent all day in the water, Strand said. It was at the age of 7 that she learned about marine biology and from there she said she knew it was what she wanted to do. Today, she plans to work at a sea turtle rescue and rehabilitation center, Strand shared.

For two summers in high school, she went to visit her aunt in Surf City, North Carolina, and worked at the Karen Beasley Sea Turtle Rescue and Rehabilitation Center, she shared. Strand said that’s where his passion for sea turtles began.

For Strand, attending here was plan A with no plan B. She said she enjoyed her experience here and is even the president of the Marine Biology Club. Her name, Luckaia Strand, makes a lot of sense, she shared.

According to Strand, her mother wanted to call her Kaia, which means “ocean” and “sent from heaven” in Hawaiian. “I was born pretty premature,” Strand said, and the odds were stacked against her. So her parents added “luck” to the first part of her name, hence Luckaia. Her last name even means “beach” in German, Strand said.

In conclusion, Strand said, “The marine biology girls here are like a powerful team.” Ungos said she shares a similar passion for manatees, as does Strand for sea turtles.

Growing up in Melbourne, Ungos said she was close to both a river and the ocean, so she grew up always learning and understanding wildlife, she explained. As she continued her studies, she said she had a better understanding of the purpose of the ocean and the importance it has for all humans.

Ungos plans to go into the restaurant business after graduation. It’s personal to her because she said she watched the Indian River lagoon where she grew up grow increasingly cloudy. Ungos said she had read articles from 50 years ago discussing how clear the river was, and for Ungos it is “a dream of mine to see this happen again one day”, he said. she declared. Ungos believes that as human beings, “our responsibility is to set the limits of what we can do, to understand that there are limits to what we can do,” she said.

Moore said she majored in marine biology because, as far back as she can remember, she loved the ocean. She grew up in a coastal town volunteering, working and loving the Alaska SeaLife Center which conducts research, is an aquarium and does rescue and rehabilitation, Moore said. She even said that in kindergarten she wanted to work there.

Moore also makes art, and she said the ocean and nature have been a big inspiration for her art. She said these passions feed off each other.

While deciding which school to attend, she said she debated between staying in the Pacific Northwest or Alaska, or she could attend BYUH and learn about a whole new ocean ecosystem that she doesn’t. knew nothing. After graduation, Moore plans to return to the Alaska Sea Life Center, which fills a position for her.

For as long as she can remember, Eliason said she wanted to study the ocean. Eliason doesn’t know where it came from because she lived in “the most landlocked part of the United States,” she said. But her mother grew up in North Florida, and they often went to visit family and spend time in the ocean, Eliason said.

Once they went to the Georgia Aquarium, and since then she has dreamed of working there, she said. This aquarium is the largest in the United States, according to the Statista website.

For Eliason, she thinks women like to study marine biology because they see the problems humans cause for these helpless animals and they see the connection between human health and the ocean, she said. declared. One of the biggest problems facing the ocean is pollution, she explained.

How Jupiter and the Moon Influence Our Lives | science and technology