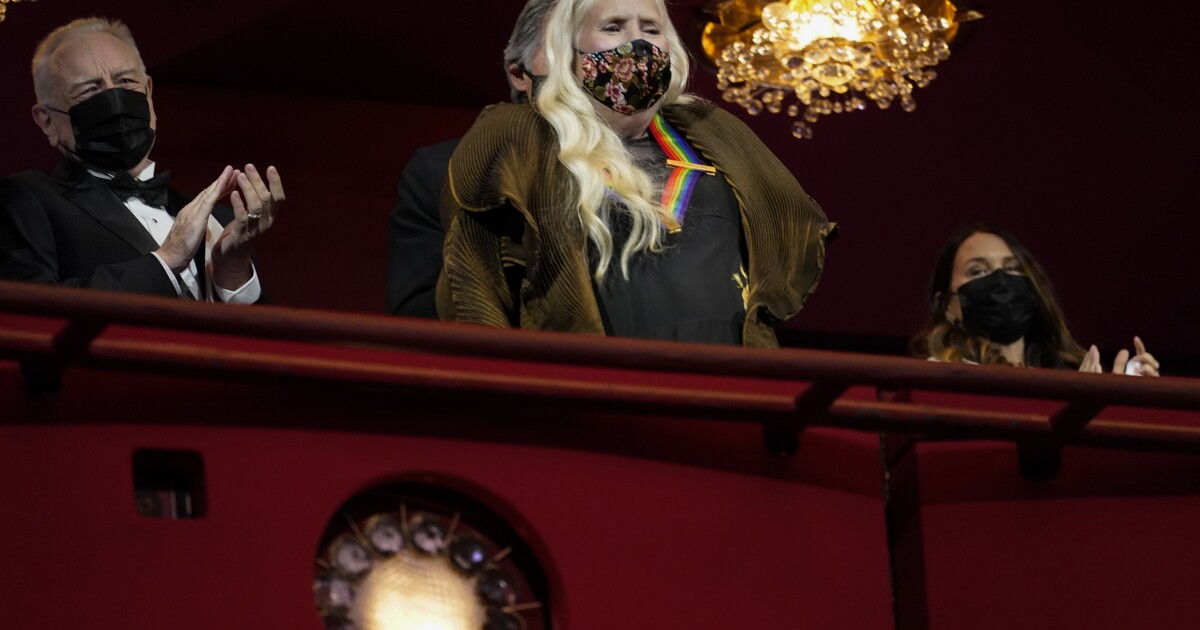 Arts & Culture Newsletter: Kennedy Center Honors celebrates Joni Mitchell, and so do we

Hello and welcome to the UT Arts & Culture newsletter.

I am David L. Coddon, and here’s your guide to all the essentials in San Diego arts and culture this week.

If ever there was a year to watch the Kennedy Center Honors, it’s this one. The televised broadcast of the recent ceremony at the John F. Kennedy Center for the Performing Arts in Washington, DC will air Wednesday at 9 p.m. on CBS-Channel 8. The winners: opera-bass-baritone Justino diaz, creator of “Saturday Night Live” Lorne michaels, founder of Motown Records Gordy Bay, the “Divine Miss M” Bette Midler and Rock and Roll Hall of Famer Joni mitchell.

Each is worthy of tribute for their lifelong artistic achievements. I am the happiest for Mitchell, who has been a big part of my life since I was a teenager. Initially all I knew about her was that she wrote “Both Sides Now”, that hit song by Judy Collins. (I would later hear Mitchell’s introspective version on his album “Clouds”, at which point I started to think about love from a very different point of view.)

But it wasn’t until I sat down next to a neighborhood crush and listened to her play guitar (a little awkwardly) and sing (most sincerely) a song from the album “Blue “from Mitchell that I thought as a teenager that there was something distinctly beautiful and intensely personal about writing Joni Mitchell songs. I became a fan. I’m sure none of my friends were.

Some of my college dorm records would be “For the Roses” (my favorite Mitchell album), “Court and Spark”, “The Hissing of Summer Lawns” and “Hejira”. I would play LPs as a DJ on the University of Southern California campus radio station and play them on dates, and in the following years I would buy them again on tape and CD.

As I grew older, I listened less and less to my Joni Mitchell albums and maybe forgot how much she meant to me. Then, a few years ago, on the opening night of Cameron Crowe’s “Almost Famous” musical at the Old Globe Theater, she was there. As I walked out after the performance, I found Mitchell, staring supremely and brilliantly at Joni, at the back of the theater. Everything that was exquisite in his art was ebbing away. Congratulations on your honor at the Kennedy Center, Mrs. Mitchell.

It wouldn’t be the holidays without “A Christmas Carol, “Right? Narratively speaking, Charles Dickens has a monopoly on our hearts and our collective conscience, which is why his lessons in compassion and recuperation never get old around Christmas time.

As UT’s Pam Kragen pointed out in her theater notebook, there are currently three Scroogey productions on stage. I still enjoyed Cygnet TheaterAnnual “A Christmas Carol,” which stars Tom Stephenson as a Scrooge whose transformation is utterly believable. I also look forward to David McBean’s delicious performances of Marley’s Ghost and The Ghost of the Christmas Gift each year.

Happy Mendelssohn to you and yours. German composer Felix Mendelssohn’s “Frolocket ihr Volker auf Erden”, which was written for Christmas liturgy purposes, is part of Saturday’s program when La Jolla Symphony & Choir presents his holiday concert.

You know what better way than to mark off a copy of Spike Lee’s new book “Spike” this holiday season? See and hear Lee in person. Sure, that will mean a trip to Los Angeles on Sunday, but if you’re a fan of Lee’s movies, what’s a little traffic?

Book Soup, the Sunset Strip in Los Angeles, welcomes “A conversation with Spike LeeHosted by fellow filmmaker Ernest R. Dickerson from 5 pm to 6 pm. The event will not take place at Book Soup but at the downtown Colburn School of Performing Arts, located next to the Museum of Contemporary Art on South Grand Avenue. Tickets, which include a copy of “Spike,” cost $ 59.

My friend (and UT Arts freelance writer) Seth Combs gave me an Instagram review that I now share with you: Monday 6-10 p.m., @northparklego will host an art exhibition entitled “My brick neighborhood”At Tribute Pizza on North Park Way. LEGO models of businesses in the North Park area and adjacent neighborhoods are promised.

The event for all ages includes food, drink and a silent auction. Check out more details on your Instagram.

“Music is always subject to change – La Jolla Symphony & Chorus”: La Jolla Symphony & Chorus continued their virtual concert series with a scaled-down version of their last concert. Continuing to take small steps towards a return to live performances, LJSC transformed the traditional orchestra to present small ensembles in order to showcase its core of talented musicians. This concert is in three sections, representing the different families of orchestral instruments – brass, winds and strings. Under the direction of conductor Steven Schick, the brass section performed three pieces by William Byrd, Gabrieli and Tielman Susato; the wind section performed a piece by Mozart; and the strings played Barber and Tchaikovsky.

“Healthy aging in the era of pandemics”: The COVID-19 pandemic has taught us all that maintaining a healthy lifestyle is extremely important, even more so for the elderly who are in a higher risk category when it comes to the virus. In November, UC San Diego’s Center for Healthy Aging hosted a one-day symposium focusing on Healthy Aging in the Age of Pandemics. True to the times, the symposium was held on Zoom allowing researchers from across the country to join and share their latest work. Topics covered included wisdom and social connections, a healthy lifestyle and exercise, a good night’s sleep, technology for the elderly, electronic psychotherapy and magnetic brain stimulation.

“In-depth look at COVID-19: adapting to a COVID world”: As the second anniversary approaches the onset of the COVID-19 pandemic, as well as the specter of epidemics during the winter season, the world continues to grapple with uncertainties. Join the experts at UC San Diego as they describe how epidemic modeling and data-driven approaches led to UC San Diego’s Return to Learn program strategies. Scientists are also discussing the latest research on proteins known as interferons and their promise as COVID-19 antiviral therapies. And finally, listen to evolutionary biologists talk about what we have learned about the transmission of the disease, the changes from the original strain of the Wuhan virus, and what these variants could mean for the future of this pandemic. .

And finally … The best events of the weekend