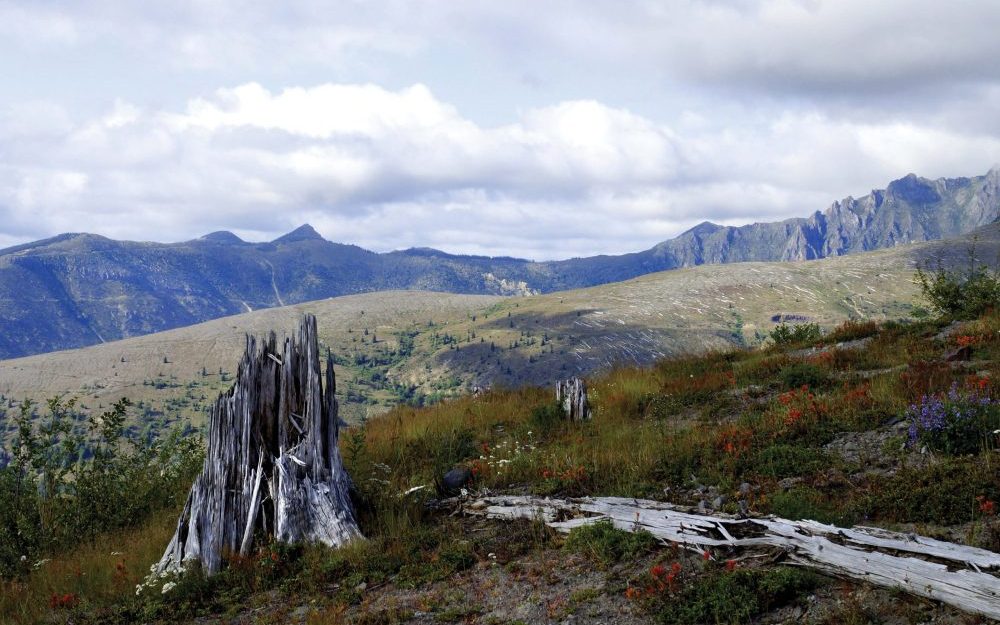 At Mount St. Helens, a spiritual insight into ecological healing

I was standing over 4,000 feet above sea level, or almost a mile. As I neared Johnston Ridge Observatory in the Cascade Mountains, the world opened up and I saw something awe-inspiring: the smoldering, glacier-speckled remains of a volcano.

I had visited Loowit 16 years ago when I was living in Seattle. At that time, I was put off. The destruction of its eruption in 1980 – the year I was born – still dominated the surrounding landscape for miles: the mountains and valleys were covered in dust, rocks and tree stumps, and they were mostly devoid of of life. A few rivers and streams ran through the area, and a few lakes and glaciers dotted the landscape. But it looked more like a lunar landscape than a life-giving ecosystem.

This time, the world around the volcano had changed. The once desolate landscape now turned green and teemed with life. The wildflowers in the meadows were plentiful. The tall pines, cedars and hardwoods were back. They created a canopy for ferns, bushes, berries, and all sorts of other plants to grow under their protection. These, in turn, created a home for more life. Hawks, eagles and other birds soared above the trees while small animals and insects scurried about their business below.

In the 42 years since its eruption and the 16 years since my last visit, the earth has undergone something of a resurrection. Much of the reason for this is simply because we humans are pushed aside. Sometimes human cooperation with God requires us to yield and let God’s Spirit work. Instead of trying to solve a problem that is beyond our power, we step back, watch and wait.

We see a similar discipline practiced by the first disciples during the initiation of the Christian paschal mystery. The disciples who do not flee after the passion and execution of Jesus, especially Mary Magdalene and the other women who watch, show paschal discipline in the aftermath of a horrible tragedy. Rather than seeking retaliation, revenge, or resuscitation of the body—to control that which was beyond their power—they remained true to the way of Jesus and their Jewish tradition of honoring dishonored prophets. Even without knowing it, they are flowing with God’s resurrection Spirit instead of trying to direct or control it.

Taoist philosophy uses the term wu wei (“active inaction”) to describe this posture. I explain it to my high school students using a famous metaphor about swimming in a river. A person practicing wu wei is a person who harmonizes his body with the power of water. They do not swim against the current, nor swim faster than the current. On the contrary, they maneuver their bodies to be carried away by the current at the speed of the river. That’s what it’s like to flow with the Spirit of God.

This discipline of cooperating with God by decentering human action is part of the story of the resurrection of the Loowit Region. According to a report by Michael Casey for CBS News, the main variable that has contributed to the region’s revival has been preventing human interference, whether caused by the logging industry or aggressive ecological restoration. Land managers simply needed to stray, monitor, read the environment and follow small stewardship methods such as strategic planting of trees to stop erosion or the introduction of fish into the the new lakes formed by the eruption. This kind of collective human recognition of finitude in the face of overwhelming power, as well as a willingness to be a steward or a midwife as opposed to a master or a surgeon, is the key to the new flourishing of life.

Loowit’s paschal mystery – his life, death and resurrection – is a symbol of hope.

It’s the same volcano and the same landscape as before but also quite different. The Earth cannot regain the beauty of before the eruption of the region. The destruction caused by the explosion remains visible. The scars are permanent. But the wound does not escalate any more. He underwent healing and growth. Natural processes and human cooperation with them have transformed this desolate landscape into a flourishing landscape. As conservationist Charlie Crisafulli described the landscape several years ago to CBS News, “In some places it doesn’t even make sense to talk about recovery. We are talking about new landforms and there is no possibility of going back to the preview.

In Jesus, God brings forth resurrected life from destruction and death. At the resurrection, Jesus’ body still bears the wounds of his torture and violent death. Wounds are not erased. But, as theologian Robert Schreiter points out, Jesus’ wounds are now healed and he can therefore impart this healing power to others. They are transfigured into a new life-giving reality.

Whether in the Gospels or in Loowit, this kind of transformation is no small feat, especially in a time of ecological crisis caused by reckless human stewardship of the Earth. Yeah, breaking the Earth out Loowit had little to do with human activity. It is not the same as the injuries caused by tar sands extraction, abundant carbon emissions, massive deforestation, microplastic contamination, and consumer behavior that places affordability above sustainability. But it reminds us that human cooperation with the Earth under the guidance of Spirit does indeed bring new life.

As I have learned from the African American Christian tradition, God creates a dead end. God’s ways are different and more effective than ours. When the impossibility of human dignity and a livable future becomes “normal,” God offers a new way, a way no individual could ever imagine. It often begins as a hidden path, or a little path, that helps the lives of the most hurt and denigrated. It is the story of Christianity initiated by God through the black church in North America and by Our Lady of Guadalupe in Latin America. In systems that go terribly wrong, God “shows up”, people respond, and the seeds of a new future – a future not closed by human cooperation with sin and evil, but opened by cooperation with grace and the Spirit of God – sows.

What might this path look like in response to the looming ecological crisis? Franciscan Father Daniel P. Horan National Catholic Journalist article, “Global Climate Change Is Also A Spiritual Crisis,” offers a helpful summary. He writes: “We cannot afford to ignore the spiritual dimension of the climate crisis among us. Indeed, as [Pope] François reminds us regularly, everything is connected, and that not only includes the vast creation community of which you and I are a part, but it also includes what we bring to prayer and what comes out of it in terms of action. Thus, a response requires unprecedented changes in the global economy and in food and energy production systems, as well as an ethic of the global common good and a willingness to engage in transnational cooperation. Yet it also requires genuine repentance and conversion of the faithful to follow where God is moving and a willingness to make the necessary sacrifices to bring about a healed and transfigured Earth.

The paschal mystery of Loowit— his life, death and resurrection — is a symbol of hope. It reminds us that the Earth wants our cooperation. It reminds us that as creatures of the Earth bearing the image of God, we can participate in and witness to the healing and transfiguration of the wounds of the Earth from death to life. As finite creatures, we can embrace our limitations and seek the hidden path, the small path, that can lead to restoration and healing in this world: the way of life.

There are two ways, one of life and one of death; but a big difference between the two ways.

Or we can ignore the paschal mystery and the example that Loowit enables ecological healing. We can continue to seek dominion over the Earth, infinite control of resources, and reckless consumption of the bounty of creation.

God continues to offer the choice that God offers the Israelites in the book of Deuteronomy: “I call heaven and earth this day to witness against you that I have set before you life and death, blessings and the curses. Choose life so that you and your offspring may live” (30:19). Much later, the early Christians understood the importance of this verse and understood it to be the key to the path of Jesus. They put these words as the first lines of the Didache, the oldest known catechesis manual: “There are two ways, one of life and one of death; but a big difference between the two ways. Obviously they tried to teach their candidates how to choose God’s offer of life.

Choose life? Or choose death? This should be a simple answer. But our current ecological crisis shows that we have not yet responded faithfully.