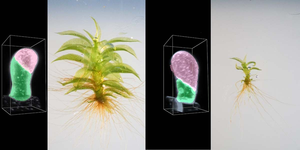 For a new plant to grow from a seed, the cells must divide several times. Daughter cells can each take on different tasks and sometimes vary in size. How plants determine the plane of cell division in this process, known as mitosis, is being researched by Teacher. dr. Ralf Resky and dr. Elena Kozgunova from the University of Friborg in collaboration with Prof. dr. Gohta Goshima from Nagoya University. By working with Physcomitrella – a moss plant, they have now identified how the mitotic apparatus is localized in the plant cell: “Using moss cells, we were able to observe an unexpected process that is important for the position of the site of cell division in plants. The process could be much more similar to animal cell division than previously thought,” comments Reski of the CIBSS Center of Excellence on the study results, which appeared in the journal Nature Communication.

When cells divide, microtubules – a dynamic network of protein filaments – form a mitotic spindle that separates the chromosomes and organizes them into two daughter cells. Here, plants and animals differ: once the spindle is formed, it stays in the same place in the plant cells. In animal cells, the spindle moves during cell division. Cells divide where they rest. The peculiarity of foam cells is that during the process of mitosis they do not form a belt of microtubules and actin filaments, two elements of the cytoskeleton. Until now, it was thought that this “preprophase band” (PPB) determines where spindles form and where they are located in plants. “But why is the mitotic spindle static in moss cells like in other plants, even though there is no preprophase band?” asks Kozgunova, lead author of the study and a Humboldt-Bayer Fellow in Reski’s lab.

To solve this puzzle, the team delved into the molecular biology trick box: they modified earth moss (Physcomitrella) plants by removing five genes. The researchers knew that they resembled the animal gene for a molecule important in mitosis: the TPX2 protein participates in the assembly of the mitotic spindle in animals.

Microscopically, the researchers observed mitosis in moss plants without the TPX2 genes. They were surprised to find that in these cells, spindles now moved during cell division in leafy shoots called gametophores. “Spindle movement had never been documented before in plant cells,” says Kozgunova. These cells divided irregularly, and as the plant grew, this caused malformations.

Tug of war in the cytoskeleton

The researchers are now proceeding to the influence of the actin skeleton of the cells and show that the actin filaments move the mitotic spindle: “It is a kind of showdown between the microtubules and the actin which positions the mitotic spindle in the cell. It appears to be similar to processes in animal cells,” Reski reports. Similarly, actin filaments are important for spindle transport in animal cells. These findings are helping researchers identify the signals that determine the fate of cells as they grow. They hope this will improve our understanding of plant growth and, eventually, our ability to influence it.

Cell division recordings were made at the Life Imaging Center, a central facility of the Cluster of Excellence CIBSS – Center for Integrative Biological Signaling Studies at the University of Fribourg.

Warning: AAAS and EurekAlert! are not responsible for the accuracy of press releases posted on EurekAlert! by contributing institutions or for the use of any information through the EurekAlert system.

PlantMWpIDB: a database of molecular weights and isoelectric points of plant proteomes