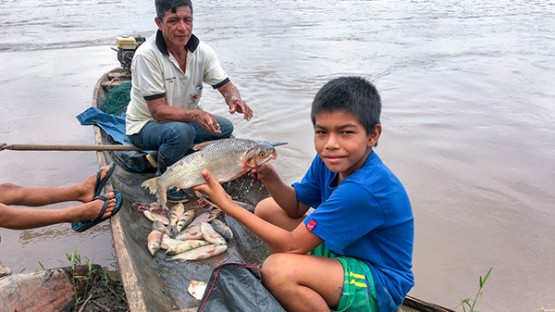 
Not all fish are created equal, at least when it comes to nutritional benefits.

This truth has important implications for how declining fish biodiversity may affect human nutrition, according to a computer modeling study conducted by researchers at Cornell and Columbia University.

The study, “Decreasing diversity of wild-caught species threatens food nutrient supplies», Posted May 28 in Science Advances, focusing on the Loreto region in the Peruvian Amazon, where inland fishing is a vital source of nutrition for the 800,000 inhabitants.

At the same time, the results apply to fish biodiversity around the world, as more than 2 billion people depend on fish as their main source of animal nutrients.

“Investing in safeguarding biodiversity can contribute to both maintaining the function and health of ecosystems, as well as to food security and the sustainability of fisheries,” said the study’s first author, Sebastian Heilpern, Presidential Postdoctoral Fellow in the Department of Natural Resources and the Environment, College of Agriculture. and life sciences.

Practical measures could include establishing and enforcing “no-take zones” – areas set aside by government where natural resources cannot be extracted – in critical habitat; ensure that fishermen respect fish size limits; and increased investment in the collection of species data to inform fisheries management policies, especially for inland fisheries.

In Loreto, people eat about 50 kilograms of fish per year per capita, rivaling the highest fish consumption rates in the world, and about half the amount of meat that an average American consumes each year. The people of Loreto eat a wide variety of fish, around 60 species, according to catch data. The species include large, predatory catfish that migrate over 5,000 kilometers, but whose numbers are declining due to overfishing and hydroelectric dams blocking their paths. At the same time, the amount of fish caught has remained relatively constant over time. This could be because people are spending more time fishing and smaller, more sedentary species or other predators are filling the voids left by declining larger predator populations.

“You have this pattern of biodiversity change, but a constancy of biomass,” Heilpern said. “We wanted to know: How does this affect the nutrients people get from the system?”

In the computer model, the researchers took all of these factors into account and ran extinction scenarios, looking at which species are most likely to become extinct, and then which species are likely to replace those to make up for a void in there. ‘ecosystem.

The model tracked seven essential nutrients of animal origin, including protein, iron, zinc, calcium, and three omega-3 fatty acids, and simulated how changing fish stocks might affect nutrient levels in the body. population. Although the protein content between species is relatively equal, smaller, more sedentary fish have a higher omega-3 content. The levels of micronutrients such as zinc and iron can also vary between species.

The simulations revealed risks in the system. For example, when small sedentary species compensated for the decline of large migratory species, supplies of fatty acids increased, while supplies of zinc and iron declined. The region already suffers from high anemia rates, caused by iron deficiency, which such findings could make even worse.

“As you lose biodiversity, you have these tradeoffs playing out in terms of the overall amount of nutrients,” Heilpern said. “As you lose cash, the system also becomes more and more risky in the face of further shocks.”

A related paper published March 19 in Nature Food examined whether other food sources of animal origin, such as chicken and aquaculture, could compensate for the loss of biodiversity and dietary nutrients in the same region. The researchers found that these options were inadequate and could not replace the nutrients lost when fish biodiversity declined.

The study was funded by a Columbia University Dean’s Diversity Fellowship, an Edward Prince Goldman Science Fellowship from the New York Community Trust, and a grant from the Foundation for Conservation, Food and Health.

Targeted disease surveillance can help prevent the next pandemic