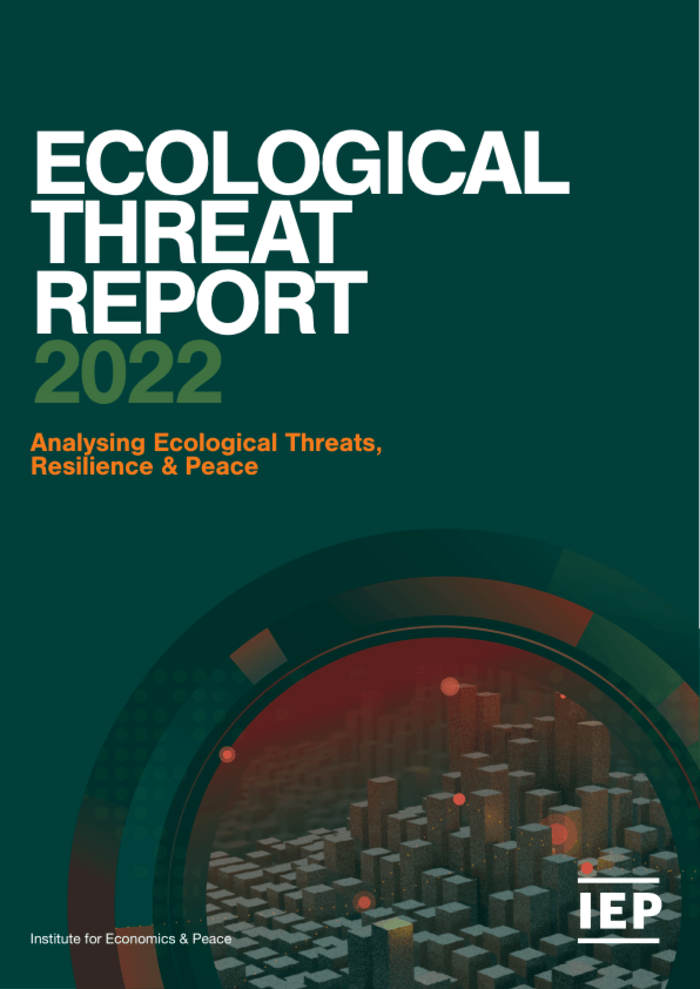 750 million people in the world are now affected by undernourishment, the Russian-Ukrainian war and inflationary pressures expected to aggravate the crisis

-Ecological threats, such as rapid population growth, water risks and food insecurity will be exacerbated by climate change, causing mass migration and conflict

-The 40 least peaceful countries in the world will increase their population by 1.3 billion by 2050, or 49% of the world’s population

-Projections to 2050 show that much of sub-Saharan Africa will not be sustainable, with a population growth of 95% projected, currently 738 million people lack adequate food and all but one country is facing extreme water stress

-In 2021, nearly 92% of the world’s undernourished lived in countries with weak to very weak peace

-Since 2019, global concern about climate change has decreased by 1.5%. The citizens of three of the four most polluting countries are not very worried: China, India and Russia.

-Air pollution costs the world $8.1 trillion annually, or 6.1% of global GDP, claiming between 6 and 9 million lives

Each year, the ETR analyzes ecological threats to assess which countries are most at risk of conflict, civil unrest and displacement caused by ecological degradation and climate-related events. The main conclusion of the ETR is that without concerted action, current levels of ecological degradation will worsen, intensifying existing conflicts, becoming a catalyst for new conflicts and increasing forced migration.

The report analyzes ecological risk, societal resilience and peace for 228 countries and territories, 3,638 administrative districts and 250 cities, assessing their ability to manage their challenges by 2050. It also highlights 27 hotspot countries1 , home to an estimated 768 million people, who face the worst ecological threats and have the lowest societal resilience. 23 of the 27 are in sub-Saharan Africa and the MENA region.

41 countries are currently facing severe food insecurity, impacting economic development, public health and social harmony, with 830 million people at risk, 89% of whom reside in sub-Saharan Africa, followed by the MENA region with 49 million. Severe food insecurity describes a state in which a person has exhausted their food reserves and their health, nutrition and well-being are at serious risk.

The number of undernourished people has steadily increased since 2017, increasing by 35% in 2021 to over 750 million people. Undernourishment, where a person’s usual food intake is medically insufficient to sustain them, is expected to deteriorate due to increasing ecological degradation, rising inflation and the Russian-Ukrainian war. In 2021, nearly 92% of the world’s undernourished people lived in countries with weak to very weak peace.

Food insecurity is linked to water stress, defined as “when more than 20% of the population does not have access to drinking water”; without adequate water capture, it is impossible to provide enough food. More than 1.4 billion people in 83 countries now face extreme water stress. Several European countries are expected to experience water stress by 2040, including Greece, Italy, the Netherlands and Portugal.

Megacities: increase in pollution and population

There are currently 33 megacities2, and the number is expected to increase to 47 by 2050. The megacities most likely to face the toughest challenges are Kinshasa, Nairobi and Lagos. More than 60% of megacities are in low-peace countries. They have the highest population growth rates, the poorest sanitary conditions, the highest levels of petty and organized crime, and widespread air pollution. However, they lack the financial and governance capacity to adequately address these challenges. The most struggling cities have the highest population growth, highlighting the precarious relationship with unsustainability.

Air pollution costs the world $8.1 trillion a year – or 6.1% of global GDP – claiming between 6 and 9 million lives. Nine cities have more than 20 times the maximum level of air pollution recommended by the WHO, including Lahore, Kabul and Agra.

“As COP27 approaches, this report is a timely reminder that the costs of many of today’s environmental challenges will only be magnified by climate change. The world’s current approach to countries suffering from the worst climate-related problems is not working; ecological threats are increasing and have systemic causes that require systemic solutions.

Governments and international agencies must invest in building long-term resilience to avoid future ecological destruction, forced migration and conflict. The Russian-Ukrainian war highlights the effects of the conflict on forced migration, with 12-14 million Ukrainians currently displaced to neighboring countries. Development programs should focus on micro-enterprises that capture water, improve agriculture, and value-added manufacturing. It will improve the lives of those who suffer the most. »

With natural disasters becoming more frequent, communities will struggle to recover before the next one occurs. This can lead to forced mass migration. EU destination countries, including Germany, Sweden, Austria and Greece, hosted more than one million refugees in 2021.

In 2021, the countries that experienced the highest internal displacement due to conflict and natural disasters were Syria, Ethiopia, DRC, Afghanistan and South Sudan.

Top jobs in sustainability and green energy in the United States