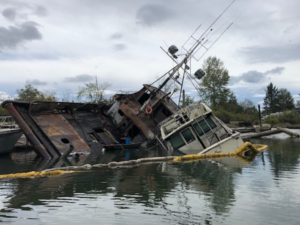 A local boat owner is considering a $70,000.00 fine from the Washington State Department of Ecology following spills into Snohomish Slough by two vessels about a year and a half ago. Here are the contact details of the agency.

The Elusive Dream and Shilo in the Steamboat Slough. Photo credit: Department of Ecology.

In 2020, a large vessel rolled over and pushed a smaller boat underwater, then sank, releasing oil and gas into Steamboat Slough on the Snohomish River near Everett. Now the Washington Department of Ecology is penalizing Ron Barber, the owner of the two vessels, $70,000 for the spill.

The incident began on August 16, 2020, when Ecology responded to reports of two sunken ships along the shore of Steamboat Slough. The larger vessel, Elusive Dream, had rolled over at low tide, pushing the smaller vessel, Shilo, and sinking it. Additional flooding through the open deck of the Elusive Dream also caused the ship to sink. Barber and his neighbors placed a boom around the ships to contain the oil and fuel leaking from the sunken ships.

After Barber failed to raise the Shilo with a bulldozer, Ecology hired contractors to respond and control the spill. During response efforts, diesel fuel continued to leak from the sunken ship.

The Elusive Dream was up and floating again on August 30. However, efforts to refloat the Shilo were unsuccessful. An estimated 214 gallons of diesel, and likely lubricating oil, were spilled into the river.

Barber moored both ships at a dilapidated quay on the quagmire, and the Elusive Dream regularly came to rest on the shore at low tide – two factors that contributed to the ships’ eventual fate. The penalty is the result of diesel entering state waters and Barber’s negligence for continuing to moor his vessels where a spill was foreseeable.

Barber was previously penalized $750 for a 50-gallon diesel spill at the same location in 2009.

The Steamboat Slough area is designated as critical habitat for several federally listed wildlife species. Even a small amount of diesel can affect the environment as well as birds, fish and other wildlife.

Barber has 30 days to appeal the sanction to the Commission of Pollution Control Hearings.

Three Junior AEs from JLR will speak at the Annual Meeting