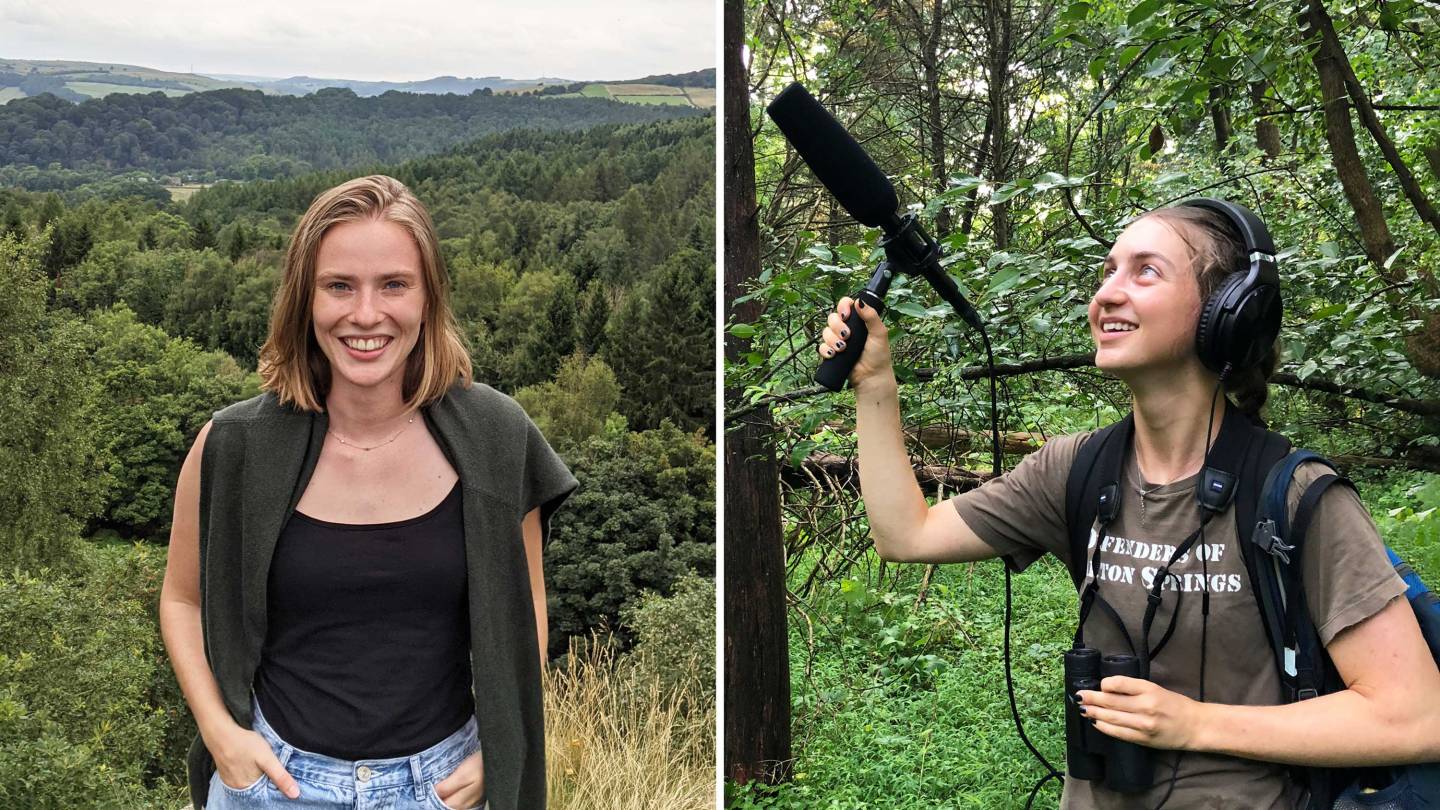 Princeton senior Katherine Irelan spent two months in the summer of 2021 hiking the slopes of Hawaii Volcanoes National Park in search of specimens of the native pūkiawe shrub (Leptecophylla tameiameiae) for her senior thesis research about how the plant allies with soil fungi to thrive in different environments and climates. Her work has been inspired by the element of nature that has always captivated her the most, which is, as Irelan said, “how things relate to each other, and in these really intricate and complicated ways “.

That same summer, Willow Dalehite traveled through different forests around Princeton listening to the call-response mating song of the Carolina Wren, which she describes as “small and brown, with a rather stern white eyebrow”. Carolina wrens are hard to spot in the forest, but Dalehite was able to take advantage of their loud calls to locate them for his graduation thesis on the evolutionary function of their song. “Their song is very loud for such a small creature,” she said. “It resonates through the forest, making it easier to track them.”

Both Irelan and Dalehite conducted their research with the support of the Becky Colvin Memorial Award, given each spring by the High Meadows Environmental Institute (HMEI) and the Department of Ecology and Evolutionary Biology (EEB). The award provides juniors concentrating in the EEB or HMEI Environmental Studies Certificate program with support for travel, research supplies and other expenses associated with field research for their senior thesis.

Irelan has always been fascinated by plants and passionate about climate change, but her interests coalesced when she visited the Amazon rainforest in high school. “The experience was really important in recognizing that this was what was important for me to do with my life,” she said.

While at Princeton, Irelan became aware of the possibility that at some tipping point, the Amazon could shift from rainforest to savannah. “It was something that stuck in my head, with the concept of the Amazon all of a sudden becoming a completely different ecosystem,” Irelan said. “I wanted to know what ecological processes were contributing to this reversal.”

At Princeton, Irelan pursued her curiosity about how plants respond to climate change and how those responses could in turn shape climate change. There are feedback mechanisms between larger climate changes and individual plant responses that are also influenced by interactions with symbiotic fungi, Irelan said.

“The symbioses between plant roots and fungi are fundamental to the evolution of plants on Earth,” said Lars Hedin, adviser to Ireland and Princeton George M. Moffett Professor of Biology and Professor of Ecology and Biology. scalable at the High Meadows Environmental Institute. “There is so much we don’t know about this mysterious collaboration between two very different organizations.”

Irelan worked in Hawaii Volcanoes National Park to collect specimens of the native shrub pukiawe (Leptecophyll tameiameiae) (right) to examine how the plant combines with soil fungi to thrive in different environments and climates. She worked at the University of Hawai’i at Hilo staining some root samples blue (left) to visualize the fungal structures within them and quantify the fungal material associated with each plant.

Photos of Katherine Irelan, Class of 2022

Hawaii Volcanoes National Park was the perfect place to study these complex interactions because there is a natural rainfall gradient across the park – some areas experience heavy rainfall while others are very dry. This allowed Irelan to collect and compare the roots and surrounding soil of plants growing in low, medium and high rainfall regions, which simulates plant growth under drought and non-drought conditions.

Irelan worked in the lab of Rebecca Ostertag at the University of Hawai’i at Hilo staining her root samples blue to visualize the fungal structures within them and quantify the fungal material associated with each plant. Other sections of the roots have been set aside for genetic analysis – there are many visually indistinguishable species of symbiotic fungi that only genetic analysis can differentiate

It’s possible that certain fungal species are more common in different environmental settings and that different species confer different benefits on their host plant, Irelan said. Knowing the most useful species of fungi could, in some contexts, have important applications for agriculture and conservation, as these species could be released to help plants thrive in otherwise harsh conditions.

“Katie’s project addresses a deep mystery of how plant communities persist in nature in the face of natural and human-induced disturbances,” Hedin said. “Her independence, fearlessness and good judgment were essential to the success of her project, and she established herself as an independent scientist capable of designing rigorous and important research projects.”

After her experience in the field, Irelan feels prepared and inspired to put her ecological research skills to good use. “I feel like I’m starting to blossom as a scientist,” she said. “I’m excited to build on this experience in the future to try to improve the way humanity interacts with the natural world.”

Up at dawn stalking the troglodytes

“We would go when the sun came up because the birds weren’t expecting anyone – they would come up with the sun,” Dalehite recalls of his summer tracking Carolina wrens at sites around Princeton, including Institute Woods near the campus and The Watershed Institute in Pennington, New Jersey. 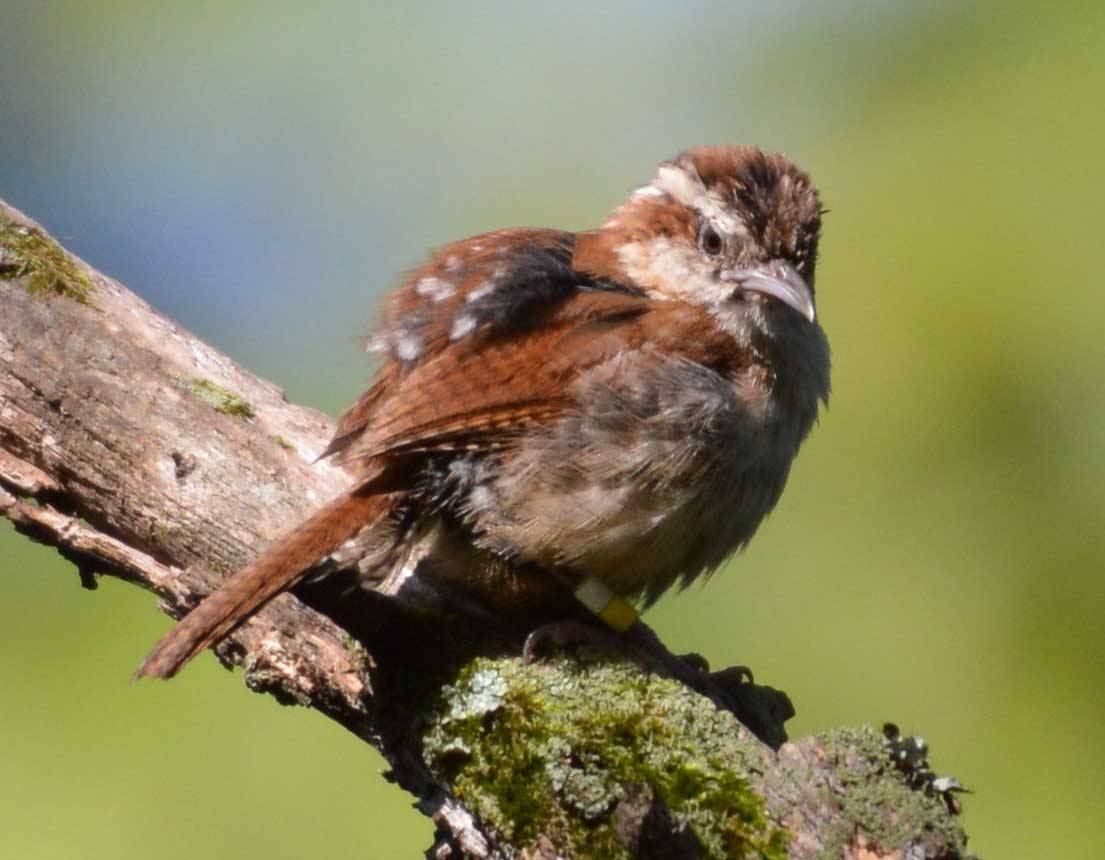 Dalehite investigated the evolutionary function of the call-response mating song of Carolina wrens (pictured), combing through the woods near the Princeton campus as the sun rose to record their songs. She focused on how a special type of vocalization known as a “duet” could strengthen the couple’s bond.

Photo by Trey Hendrix, Department of Ecology and Evolutionary Biology

Growing up in central Texas, Dalehite was a bird and nature lover since childhood when she regularly went bird watching with her mother. “I’ve had an interest in the study of ecology for a very long time because I’ve always had this love and interest in the natural world,” Dalehite said. “I also find the birds really charismatic – they’re just fun.”

Dalehite’s interests in ornithology and behavioral ecology led her to begin working with Christina Riehl, assistant professor of ecology and evolutionary biology and associate professor at HMEI, during her second year. Last summer, however, was Dalehite’s first chance to work on the pitch due to the coronavirus pandemic. She worked with EEB Ph.D. candidates Maria Smith and Trey Hendrix to catch wrens using mist nests to collect blood samples, take measurements and apply bands before releasing them. birds.

Dalehite planned to focus her senior thesis on the breeding habits of wrens and how food is allocated to nestlings – topics she had studied in the larger bird species ani as an HMEI environmental intern in the Riehl’s lab in 2020. But her plans changed when she entered the field. “We found out pretty quickly that the summer of 2021 was not a good year for cave dwellers because the previous winter had been quite cold,” Dalehite said. “Cold weather is one of the main killers of wrens, so we didn’t find many nests.”

She focused on the social dynamics of couple bonds and, in particular, how a special type of vocalization called ‘duet’ might strengthen these couplings.

As you might guess, the duet refers to when a male and a female sing simultaneously, except the birds don’t sing the same tune. A male wren begins a duet by singing a sung, repetitive phrase – which sounds like “tea kettle, tea kettle, tea kettle” – and the female wren chimes in with a trill or chatter.

There are several hypotheses as to why the Carolina Wren Duo. Some researchers think it could serve as a territorial defense, while others think it could work to strengthen pair bonds. These little birds are fiercely monogamous – males and females form pairs that can last for several years. Pairing and being able to defend resource-rich territory are both very important for the survival of wrens, especially during winter, Dalehite said.

Dalehite followed troglodytes through the forest and recorded their songs. She then converted these audio recordings into spectrograms that allowed her to visualize the frequency and duration of duets, as well as the synchronization of male and female songs. She is now analyzing these songs to determine if a couple’s age is associated with certain duet characteristics, such as synchrony.

As a researcher, Dalehite stood out for her creativity and independence, said Riehl, who was Dalehite’s thesis supervisor: “I was absolutely blown away by Willow’s enthusiasm and intellectual maturity. met many outstanding students at Princeton, but Willow is the one I know will go on to do great things in her career, both at Princeton and beyond.”

After getting a taste of fieldwork, Dalehite looks forward to continuing to explore ornithology and behavioral ecology. “Fieldwork is probably one of my favorite parts of ecology now,” she said. “It was really fun to spend so much time in nature every day.”