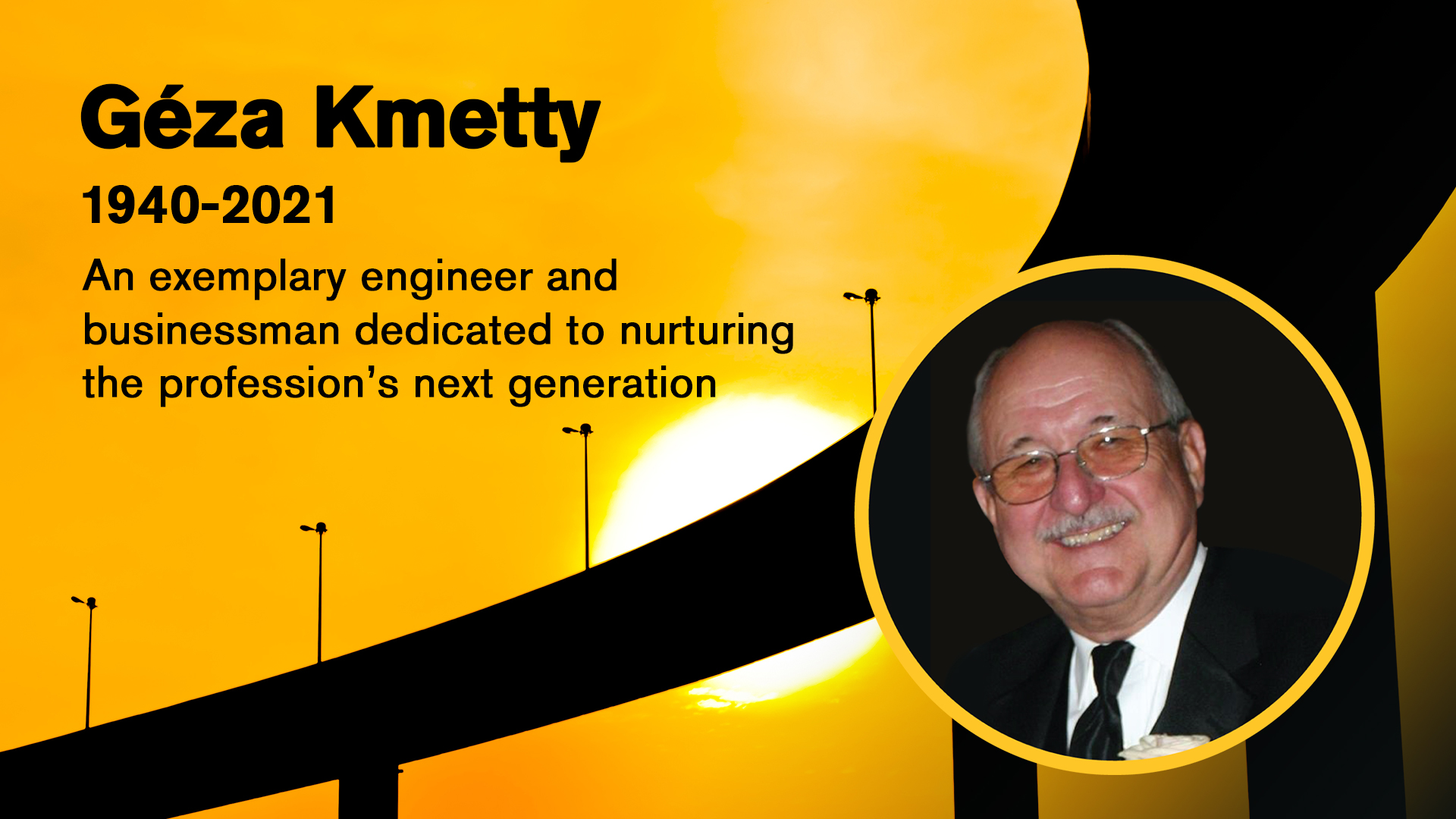 In memory of the enterprising engineer Géza Kmetty

The dramatic upheaval that Géza Kmetty endured during his early years makes his life and career trajectory, professional achievements, and contributions to engineering and higher education truly remarkable.

As a young man, he left his homeland and his family at the start of the violent Hungarian Revolution of 1956, the revolt of many Hungarian citizens against the communist government and its rule under the Union of Soviet Socialist Republics.

The crackdown on Hungarian rebels resulted in the deaths of thousands, while around 200,000 fled as refugees. About 30,000 of them would be admitted to the United States, including Kmetty.

In 1965, Kmetty earned a degree in civil engineering from Arizona State University after moving upstate to join Esther, the woman he would marry and raise a family of three children with. Two of them are also ASU graduates.

Over the next 50+ years, until his death on December 12, 2021, at the age of 81, Kmetty would succeed in multi-faceted technical and business endeavors and help drive progress in emerging areas of technology. ‘engineering.

It would also nurture new generations of engineers through teaching and mentoring, and through many generous gifts to provide resources that have helped make today’s Ira A. Fulton Schools of Engineering the ‘ASU among the nation’s leading engineering schools.

The gifts of his talent, time, mentorship and community leadership had a tremendous impact on the future of what is now the School of Sustainable Engineering and the Built Environment, the one of seven Fulton schools. As one of five founding members of Friends of Civil and Environmental Engineering, Kmetty helped create the organization that today advances the school through industry and community connections.

ASU Regents Professor Edward Kavazanjian, former chair of the civil and environmental engineering program, recalls Kmetty’s desire to serve was shown when he joined the Friends of Civil and Environmental Engineering, which also aims to support efforts to ensure and improve the quality of education that students receive.

“Generally, the $1,000 annual fee is paid by the companies or businesses the members work for,” Kavazanjian said. “Géza was the first and, still today, the only member to pay the dues out of his own pocket.

Kmetty’s passing “is a great loss to our school and the profession as a whole”, said Professor Ram Pendyala, director of the School of Sustainable Engineering and the Built Environment, which houses the civil engineering program and the Del E Webb School of Construction.

“He cared deeply about our students and the future of the workforce,” Pendyala said. “He dedicated a lot of his time and energy to teaching our students real-world engineering projects and providing them with the insights and skills needed to succeed in their careers.

Pendyala adds that Fulton Schools are fortunate that Kmetty’s “spirit of compassion and generosity has been passed on” to one of his sons, Chris Kmetty, who graduated from ASU with a degree in civil engineering in 1997. The son is “now continuing his father’s incredible work,” says Pendyala.

Chris Kmetty says his father had a wide range of engineering interests and pursuits to draw on for the lessons and knowledge he imparted to students, including work that helped launch some key aspects modern engineering practices.

Géza Kmetty (right) came to Arizona after meeting Esther, who lived in the Phoenix area and would become his wife. Two of their three children will follow in their father’s footsteps as graduates of Arizona State University. Photo courtesy of Chris Kmetty

He worked with government agencies and started his own small business, including Southwest Computing, one of the first consulting firms to have a computer, which he used for computer modeling of earthmoving projects and hydrology in Arizona.

Kmetty then owned and partnered several consulting firms in Arizona, including NBS Lowry, McLaughlin Kmetty Engineers, and Kmetty Consulting. After retiring from his work as an engineering consultant, he then worked for the Maricopa County Flood Control District, helping to establish its value and scoping engineering processes.

Chris Kmetty says his father was also part of the first wave of engineers to introduce the application of computer modeling to the engineering field.

“He was at the forefront of engineering and design technologies, and he innovated using them for engineering projects,” he said. “That’s what led to the start of the first business he owned.”

Kmetty was also an early member of the Society of American Value Engineers, helping to take another evolutionary step in optimizing the economics of engineering projects.

The value engineering process involves formulas designed to provide optimum performance, quality, safety and reliability while achieving these goals at the lowest cost throughout the lifecycle of engineering projects.

“I call him the godfather of value engineering in Arizona,” Chris Kmetty said. “He was really the one who pushed it here and convinced people in industry and government of its importance.”

His father also convinced Fulton Schools to be one of the first university engineering programs to offer a graduate course in value engineering.

“Géza was very passionate about ASU and wanted to incorporate value engineering into our curriculum,” said Professor George Edward Gibson Jr., former director of the School of Sustainable Engineering and the Built Environment. “I met him several times and he convinced us to add a graduate course to teach civil engineering and construction students.”

Géza and Chris Kmetty, along with faculty associate Steve Kirk, have taught the course as a team for several years.

“He was very well received by our students. In the second year the course was taught, a team of students from one class won a national competition focused on value engineering,” Gibson said, recalling that “Géza had a big smile on his face. his face when he shared this news with me. I have always enjoyed interacting with him and he will be missed.

For all of Kmetty’s technical mastery in his field, longtime colleague and collaborator Sandra Houston, Emeritus Professor of Civil, Environmental and Sustainable Engineering at the Fulton Schools, regards him primarily as “perhaps the most dedicated and the most faithful of the ASU that I have known”. .”

Kmetty was for a time a frequent guest speaker in Houston-run classes.

“He always wanted to work with students. He truly believed that civil engineering was one of the best professions in the world and he promoted it fervently,” she said. “He had an infectious spirit and was just enthusiastic about involving young people in the profession.”

Kmetty’s commitment, combined with his engineering achievements, innovations and industry leadership, also made him one of the few outstanding graduates to be appointed to the School of Sustainable Engineering and to the Academy of Distinguished Alumni of the Built Environment.