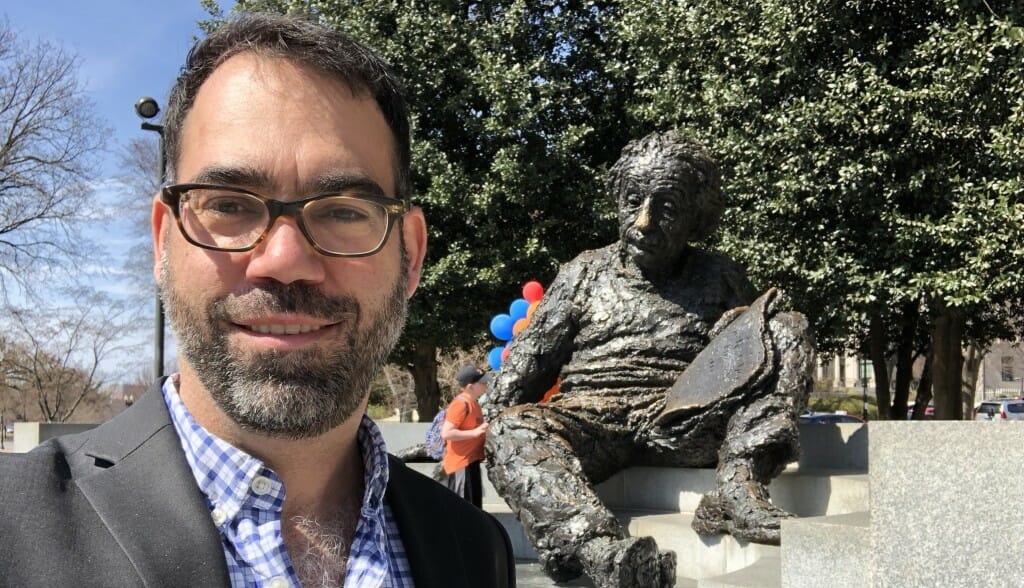 Kyle Cranmer, a University of Wisconsin-Madison alumnus who was instrumental in the discovery of the Higgs boson, will become the next director of the American Family Insurance Data Science Institute.

“We are delighted to welcome Kyle back to UW-Madison, where he received his doctorate in physics in 2005,” said Amy Wendt, associate vice-chancellor for research in the physical sciences. â€œKyle brings to the Director role an experience that will facilitate research synergies across campus, connecting data scientists and subject matter experts working to address current challenges ranging from healthcare to education,â€ through the sciences and beyond.

Founded in 2019, the institute strives to advance discoveries that benefit society through data science research, translation of basic research into practical applications, and interdisciplinary collaboration. The institute is a campus focal point for integrating data science into research, and one of its top priorities is to build a thriving data science community at UW-Madison.

Cranmer is currently a professor of physics at New York University and will assume the leadership of the institute on July 1, 2022, joining the faculty of the UW-Madison Department of Physics, with an affiliate position in statistics. Brian Yandell, the David R. Anderson founding director of the Institute for Data Science, has been in office since 2019.

Cranmer came to data science through his contributions to the search for the Higgs boson, a fundamental particle whose existence was theorized in the 1960s and which is responsible for the mass of objects in the universe.

Finding evidence for the particle required going through huge amounts of data generated by billions of high-energy particle collisions. Cranmer developed a collaborative statistical modeling method that allowed thousands of scientists to work together to research, and eventually find, strong evidence for the Higgs boson in 2012.

â€œShortly after the discovery, I turned to a broader reflection on data science and machine learning for the physical sciences, identifying synergies and opportunities, and shaping this discussion internationally. â€Says Cranmer. His research has extended beyond particle physics and influences astrophysics, cosmology, computational neuroscience, evolutionary biology, and other fields.

At NYU, Cranmer is executive director of Moore-Sloan Data Science Environment, associate professor at the Center for Data Science, and is affiliated with the main machine learning group. His awards and honors include the Presidential Early Career Award for Science and Engineering in 2007 and the National Science Foundation’s Career Award in 2009. He was elected a 2021 Fellow of the American Physical Society.

Understanding and addressing the impact of data science on society, and the disproportionate effects it can have on marginalized people, is at the heart of Cranmer’s vision.

One of Cranmer’s goals for the American Family Insurance Data Science Institute is to expand engagement in data science across campus. Drawing on his own experiences crossing traditional academic boundaries, he aims to build partnerships between people working in data science methodology and those working in the humanities and natural, physical and social sciences. Understanding and addressing the impact of data science on society, and the disproportionate effects it can have on marginalized people, is at the heart of his vision for this work.

â€œThe issues of equity, inclusion and prejudice, and their impact on society, are very real issues that anyone can relate to, I think,â€ says Cranmer. â€œBut the way they manifest themselves technically is much more subtle. Raising awareness of how subtle and difficult these issues are, I think, will be helpful in broadening the discussion on campus. “

Cranmer grew up in Arkansas and was in the first graduating class of a public and residential high school for math, science, and the arts. He describes the school as a “melting pot” where students interested in computer science, physics, mathematics, and engineering collaborated on projects that today could be considered data science. Frustrated by the lack of extracurricular activities at his brand new school, Cranmer got involved in school policy and student government.

â€œIt was one of my first calls for leadership,â€ he says. â€œI walked into the school and there was nothing set up at all – no student clubs, no activities. It was a very influential moment for me – realizing that you can be part of the solution and shape the environment around you to improve it.

Drawing on his experiences crossing traditional academic boundaries, Cranmer aims to build partnerships between people working in data science methodology and those working in the humanities and natural, physical and social sciences. Contribution photo

Cranmer looks forward to connecting and sharing ideas with the people and research centers at UW-Madison. He stresses the importance of building trust, both inside and outside the university, by demonstrating the potential of data science to positively affect the lives of people and the world.

â€œWith experience as a national leader in data science, Kyle is well prepared to guide the institute through partnerships with business thought leaders,â€ says Wendt. “His own research focuses on data science methods that broaden participation to advance discovery in particle physics is really rooted in the Wisconsin idea.”

For Cranmer, contributing to the idea for Wisconsin is an exciting aspect of his new role. He sees opportunities for UW-Madison to engage with the community in research, such as working with the Extension Division and farmers on issues such as agricultural sustainability, carbon capture and climate change.

â€œThis kind of capability is very, very unique, and there are several different entry points for the Data Science Institute to be involved in such research,â€ says Cranmer. â€œThe role of data science would be really compelling. “

After his years of experience shaping the first wave of data science at NYU, Cranmer is eager to lead an institute well positioned to make a real impact.

“I think it’s a pretty exciting thing to be a part of.”