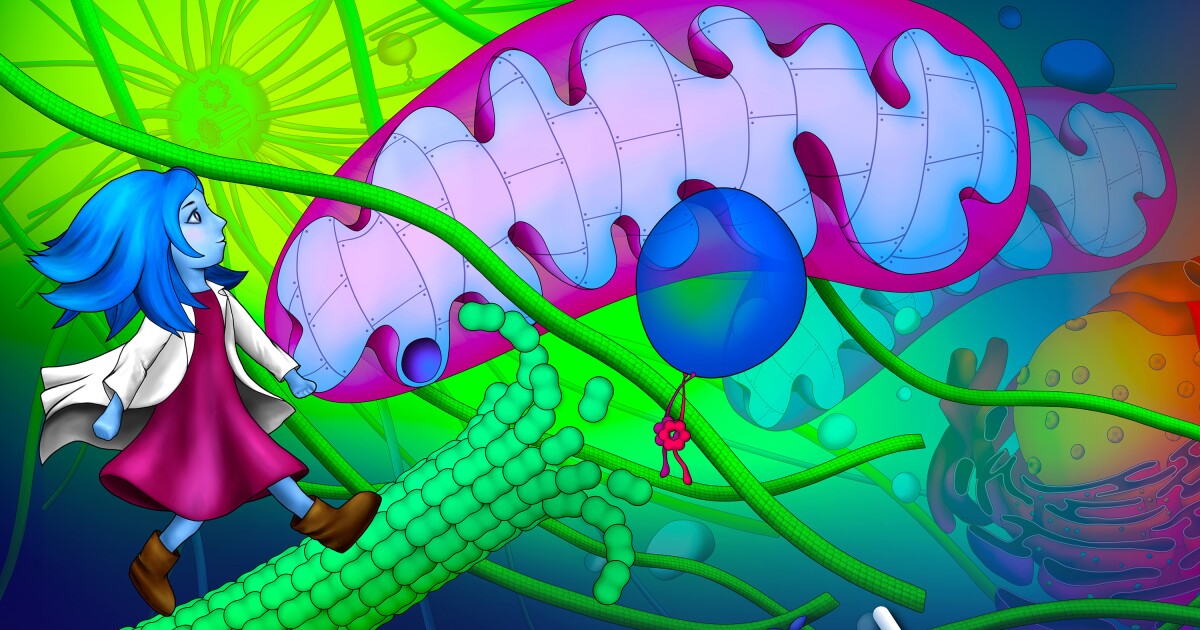 Continuing her path to influence others – especially girls – to pursue science, local researcher Beata Mierzwa is launching a new video game about the inside of a cell on Friday, July 8.

Mierzwa, a postdoctoral researcher in molecular biology at UC San Diego in La Jolla and the Ludwig Institute for Cancer Research on the UCSD campus, received a grant from the American Association for the Advancement of Science as the one of her If/Then ambassadors, a role in which she works to encourage female interest and innovation in science.

As an If/Then ambassador, Mierzwa last year won a feature on “Mission Unstoppable,” a CBS TV show aimed at showcasing work like hers, and created a clothing line with her artistic drawings of cells and cell division.

“Microscopya,” which took Mierzwa two years to develop with the help of longtime partner Matthew Cooney, uses hand-drawn illustrations and science-based puzzles to explore the inside of a cell.

“We want to share the beauty of the work inside the cell,” Mierzwa said. “A lot of times when you look at textbooks…everything looks very complex and everything is very isolated and simplified. But when I started studying molecular biology and started doing microscopy, I realized how amazing and beautiful the world is inside.

“Microscopya” offers a “world where there is a joy to explore, [which] shows a bit of this complexity and beauty and dynamic nature of the world inside of us,” she said.

The game, also funded with support from the American Society for Cell Biology, was originally developed for young female students as part of Mierzwa’s science outreach, but she soon realized it was appropriate for kids. people of all ages, backgrounds and genders.

With plenty of visuals to “inspire creatives”, Mierzwa said the game highlights that art and science “go hand in hand”. You can be creative and love art and also be a scientist.

“Microscopy” is largely educational but also an experience, Mierzwa said, not simply “a textbook disguised as a game.”

“I like to communicate science visually with drawings and fashion and now an interactive type of medium,” she said.

The game’s elements, from puzzles to music, are meant to be immersive and enjoyable, said Cooney, who has a master’s degree and experience in international business and is pursuing a master’s degree in biology. “We don’t force you to learn facts or words. … You’re just going to glean information from the experience.

The game was tested by a wide audience, Mierzwa said, and many continued to play the game at home and provided positive feedback.

Developing the game allowed Mierzwa and Cooney to gain experience in a field that was foreign to them.

“We both grew up playing video games,” Mierzwa said. She always thought “if I had the chance to study something completely new and unrelated for fun, it would be video game design.”

She and Cooney eventually found programmers at Atelier Monarch Studios to help them code “Microscopya”, incorporating the puzzles and visuals with music by Jamie van Dyck of the band Earthside.

“I like to visually communicate science with drawings and fashion and now some type of interactive medium.”

She said she hoped “Microscopya” would lead to more science games and added that getting the game into the hands of a wide audience could lead to its follow-up with one on cell division.

Cooney said he hopes the game will make science a viable path for anyone interested.

“I loved biology [but] it never crossed my mind [until adulthood] that I could work in science,” he said. Having a game like “Microscopya” earlier would have made that option more accessible, he said.

The game will be on Android, iOS and web browsers and will be free for everyone.

“We want to make sure there are no obstacles,” Mierzwa said.