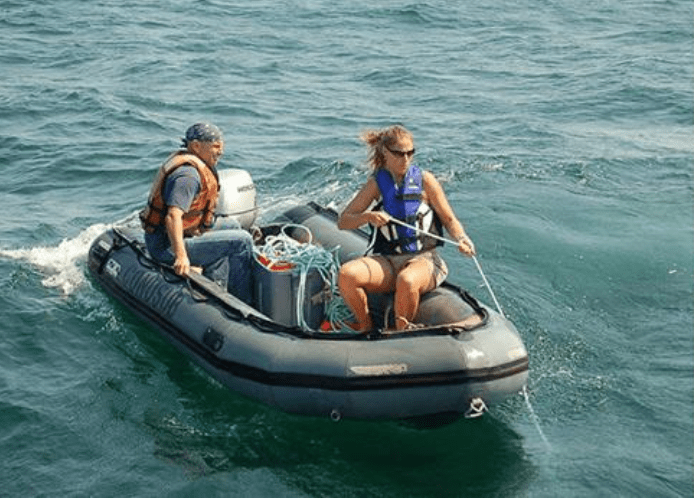 Division of Naval Undersea Warfare Center (NUWC) Newport marine scientist Natasha Dickenson, who works in the environmental branch of the company’s operations department, is proof that not all successful careers follow traditional paths.

During a March 24 virtual presentation to students at the University of Rhode Island’s Graduate School of Oceanography (GSO) as part of his alumni network series, Dickenson described how his sometimes difficult journey was filled with enriching experiences along the way.

“Non-traditional paths work too,” Dickenson said. “It was difficult, but everything went well. I’m happy with where I am now.

She is an expert in marine, estuaries, wetlands, biology and ecology, with a focus on habitat characterization, dredged material management and benthic community assessment.

His path to this point, however, began nearly 30 years ago.

Dickenson, a native of North Kingstown, Rhode Island, who now resides in Waterford, Connecticut, began his college career in 1993 at Skidmore College in Saratoga Springs, New York. After a semester in the field for a marine mammal conservation program in Mexico and another semester at the University of New Hampshire, she finally landed at URI. There she graduated with a Bachelor of Science in Biology with a Marine Concentration in 1997.

That same year, she completed an internship at the Mystic Aquarium in Connecticut, where she trained and cared for beluga whales. Then, from 1998 to 2000, she worked summers in sailing in Newport and St. Martin, spending her winters skiing in Colorado.

“These are experiences I don’t regret at all, but I realized it was time to get a job,” Dickenson said. “I applied all over the country.”

“The work was focused on heavy field investigations,” Dickenson said. “Halfway through my stay there, I decided to get my master’s degree. I stayed full time at SAIC and took courses at GSO. It took me six years to complete my master’s program because I only took one class per semester. It was extremely difficult, but it was doable.

Dickenson credited her experience at SAIC with helping her focus on her area of ​​interest, benthic ecology. This refers to the study of organisms that make up bottom communities – sediments, seagrasses and rocky outcrops, for example – in lakes, streams, estuaries and oceans. This information is used to determine the health of an environment and to conduct impact studies.

“There was no official curriculum at GSO suitable for my research, so I kind of designed my own through GSO-specific course offerings, courses at other universities, and multiple research projects. independent on benthic subjects,” said Dickenson. “My research for my thesis was not fully funded, but my project was nonetheless a success thanks to the generosity and support of many people.”

For her dissertation, Dickenson focused on the recolonization and ecological succession of artificial reefs in Rhode Island Sound.

“It was a very interesting project,” said David Smith, G.S.O. Dean of Students. “Some of you may remember the old Jamestown Bridge. Natasha did a very fascinating project on what happened to the debris.

After the demolition of the Jamestown Bridge in 2006, concrete debris was placed in two designated coastal artificial reef sites – Gooseberry Island Reef at the mouth of Buzzards Bay and Sheep Point Reef off Newport. For his project, Dickenson assessed reef morphology and colonization and ultimately determined that old bridge debris served in a productive capacity to enhance marine resources.

“I got really interested in characterizing and evaluating benthic habitat,” Dickenson said. “I moved from working with marine mammals to benthic ecology, which I have continued until today.”

Her work in benthic ecology led Dickenson to a brief stint in the Department of Environmental Management at RI as a field researcher before applying and being hired at the Newport Division in April 2008. She earned her M.S. from the GSO in 2010.

Dickenson has a number of areas of expertise, including hull biofouling of decommissioned Navy vessels to determine the risk of invasive species transfer. Other areas of interest include anti-fouling methods, invasive species risk analysis, coral mitigation and socio-economic studies of fisheries examining use conflicts on marine ranges.

“In terms of scientific expertise, we have people in our office with all types of aquatic experience,” Dickenson said. “The Navy is an excellent environmental steward of the sea. It does what it needs to do to conduct training and testing activities, but what we do is ensure that these activities are conducted in a way that limits the impact on marine species. These activities must take place, but they must also take place within the limits and in accordance with the regulations. »

Dickenson concluded by noting that there are a number of job opportunities, including internships, at the Newport Division. More information is available here. [link — https://www.navsea.navy.mil/Home/Warfare-Centers/NUWC-Newport/Career-Opportunities/]

“I had the good fortune to travel a lot after my bachelor’s degree and always knew I was going to come back to Rhode Island,” Dickenson said. “I’ve traveled all over the world for NUWC so it satisfies my travel bug professionally and then I have my base here. I am very happy to call Rhode Island my home.

Like Newport Buzz? We depend on the generosity of readers like you who support us, to help us in our mission to keep you informed and entertained with local and independent news and content. We really appreciate your trust and support!