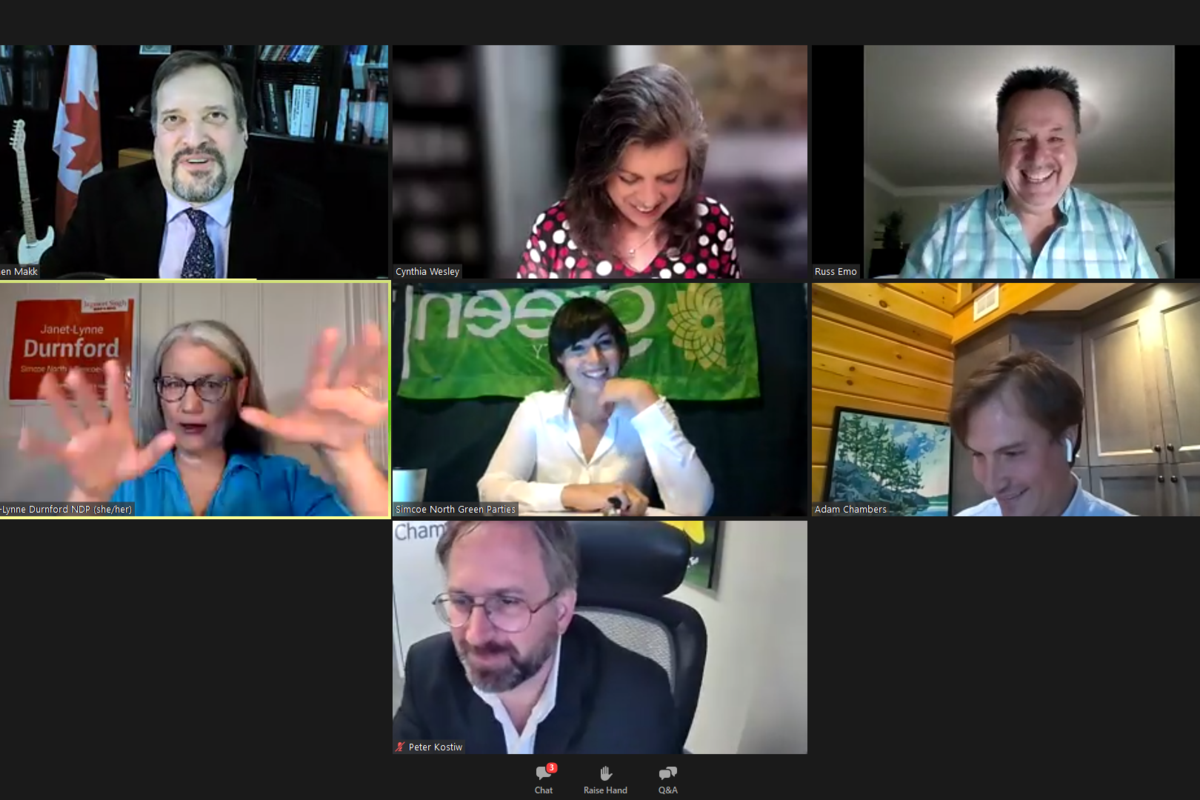 There were a few tweaks, but overall Wednesday night’s virtual forum was civil as the format did not allow for any debate between candidates.

Six citizens are running to replace Bruce Stanton, longtime MP for North Simcoe, in the federal election on September 20. Each made presentations and answered questions pre-submitted to a virtual Zoom audience hosted and moderated by the Southern Georgian Bay Chamber of Commerce.

Peter Kostiw, president of SGBCC and moderator of the hour-long meeting, reminded the audience that “the point is to enlighten us on the positions of the candidates rather than to debate the issues”.

Four pre-selected questions were asked of each candidate to be answered within two minutes, with everyone strictly adhering to the set rules.

Yes, all of the candidates said to varying degrees except Emo.

“There are other factors, but to say that humans may be 100% responsible for global warming; I don’t believe it can be proven, ”Emo said, adding that sources outside of himself have said climate change is bogus, as posted on YouTube.

Chambers and Wesley-Eskimos aligned in their responses that the ecology of North Simcoe needs protection, before straying from their respective Conservative party lines by noting the punitive carbon tax and the Liberals with their call for a adaptive regeneration plan.

Makk said climate change was not an urgent problem; Durnford called it an existential threat of urgent priority; and Brooks said it was compelling science.

2: Do you think your party’s plan to balance the budget is realistic?

Durnford said his party’s platform had been encrypted while stressing that the NDP would tax the ultra-rich to compensate for social services.

Brooks mentioned that the Greens’ plan for 2019 had been fully reviewed and approved by a Parliamentary Budget Officer as being viable.

Makk called the PPC’s four-year plan to balance the budget “hard, realistic, but also essential,” while Emo said the CHP plan would pay down national debt through loans and introduce mandatory balanced budgets.

“The economy is fragile right now, and so are the people,” said Wesley-Eskimos who promised the Liberal budget would be balanced in the future, but that “cutting services now will only hurt more. people”.

Chambers added of the aggressive Conservative plan: “We absolutely need to focus on restraining government growth and making sure we leave a fair financial situation to the next generation.”

3: What is your position on compulsory vaccinations for health workers?

Makk and Emo both said the mandatory vaccinations were a direct violation of the Canadian Charter of Rights and Freedoms.

Durnford observed: “In a free and democratic society, our individual rights are legally limited when they infringe the rights and freedoms of others. Earlier this week, Durnford invited all six North Simcoe candidates to register a “Take the shot! ” video, for which only four agreed.

Brooks noted that the vaccination had proven to be safe, while Wesley-Eskimos again aligned himself with Chambers, saying the mandatory vaccinations are “not a federal lawsuit.”

Moderator Kostiw noted “under different circumstances we could have continued this juicy debate”, before moving on to the final question.

4: Do you agree with the subsidies to the oil and gas industry?

Chambers said royalty payments and corporate welfare are unhealthy for taxpayers, noting that equity stocks have worked better in the past.

Wesley-Eskimos said the planet can regenerate itself, using an Indigenous saying: “When will humans realize you can’t eat money?” “

Brooks gave examples of the ultra-rich getting richer as low-income jobs disappear since the last election.

“It’s no wonder 40% of voters in North Simcoe do not show up on election day,” she said, adding that the federal government spends more time looking after businesses than the average of Canadians.

“I oppose all forms of corporate welfare and corporate capture of the regulatory system, the latter being the biggest problem in my opinion,” Makk said.

The meeting has been recorded and will be available on the South Georgian Bay Chamber of Commerce website.