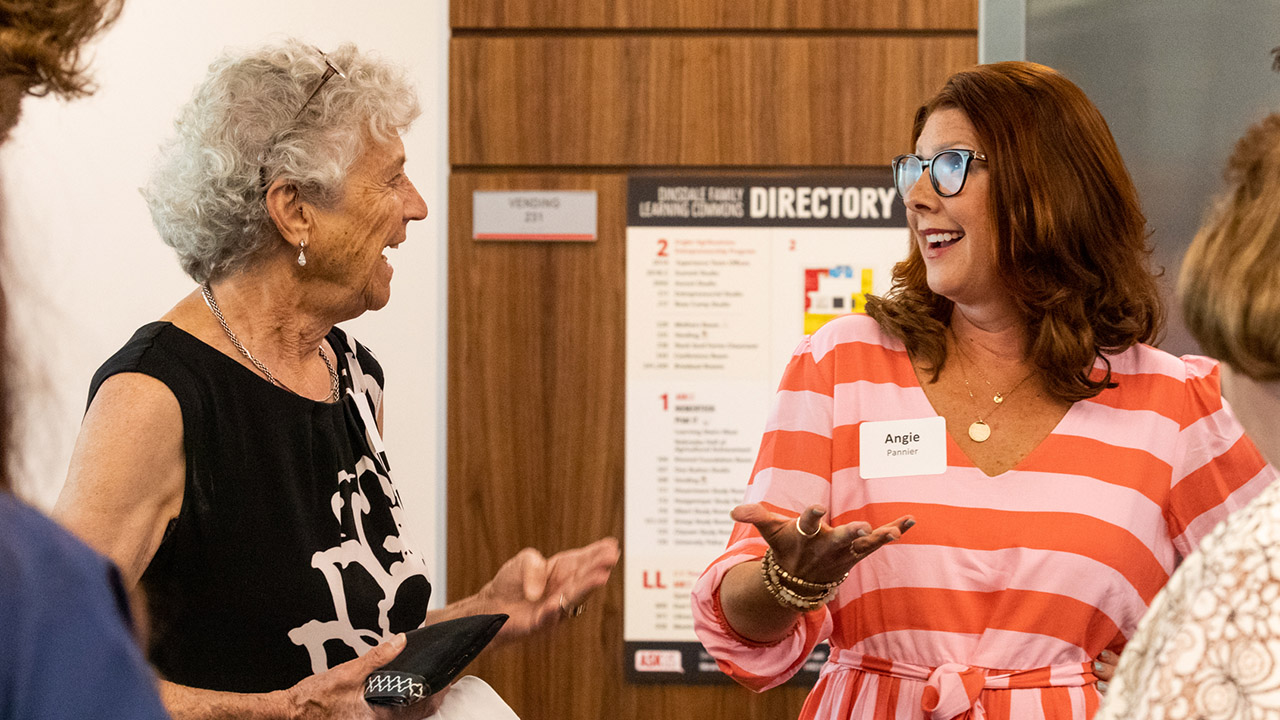 A fellowship sparked friendship led to Angela Pannier of Nebraska being named the first Swarts Family Chair in Biological Systems Engineering at the University of Nebraska-Lincoln.

Celebrated on July 13, the nominated chair is an honor in the making, taking root in 1997 when a scholarship sparked a friendship between Pannier (then an engineering student) and Dr. Carol Swarts, a pioneering physician from Nebraska.

This initial connection has grown over the years as the two have shared similar career paths, opening doors and succeeding in male-dominated fields. The University of Nebraska Medical Center accepted very few women when Swarts attended. And Pannier, now a professor of biological systems engineering, was the first female faculty member to gain tenure in her department.

Swarts was born on a rental farm in western Box Butte County, Nebraska. Throughout his childhood, the family moved to several farms in several states while his father was a farmer. Swarts took note of the work ethic and values â€‹â€‹of her parents, which inspired her from an early age.

Swarts mother Elenore Gakemeier Swarts was a first generation American and a trailblazer in many ways. She was Nebraska’s first female school principal. Her courageous demeanor and determination to be a model of success for herself and her family instilled in the Swarts children a deep respect for education. Her parents’ example fueled Carol’s dream of becoming a doctor.

â€œIn the 1930s and 1940s, that was not a lot of parents’ goal for their daughters, and none of them questioned that I was going to be a doctor,â€ Swarts said.

As she had planned, Swarts launched a career in medicine. She graduated from the University of Nebraska Medical Center in 1959. Despite comments from some that women shouldn’t be doctors, Swarts and her female peers supported each other and embarked on successful careers.

After Elenore passed away at the age of 99, Carol and her brothers decided to set up an undergraduate scholarship fund in her memory.

Pannier was one of the first recipients of the Elenore Gakemeier Swarts Biological Systems Engineering Fellowship, a fund that continues to support students. Every year since the inception of the fund, Swarts has made efforts to meet fellows over lunch or dinner. Upon meeting Pannier many years ago, Swarts saw a remarkable young woman.

â€œAngie was one of the first recipients, and just looking at her during her undergraduate studies, she was a representative of the region; she was a rock star, â€Swarts said. “She was encouraging other women to get into bioengineering, and then over the years I have had the privilege of meeting her and watching her grow.”

Likewise, Pannier was impressed with Swarts’ success, as well as her generosity in meeting her as a fellow.

â€œI was just amazed that someone with all of these attributes would spend time with me, a random student, and help fund my studies, which was essential for me,â€ Pannier said.

Passionate about the environment, drinking water and medicine, Swarts continued to support the Nebraska Biological Systems Engineering Program. When Pannier returned to college as a faculty member, their relationship turned into something bigger.

Swarts began asking Pannier what she needed to make sure the department had the support it needed to conduct cutting-edge research and pursue outstanding educational programs. Pannier’s research focuses on DNA vaccines, tissue engineering, developmental biology, and non-viral gene delivery systems for stem cell and medical device applications. This work – along with the work of its students – was beginning to gain national and global attention.

Swarts has expanded its support for students to include travel grants for graduate students. She also supported the creation of a hands-on teaching lab and an annual outstanding graduate student award. When Pannier brought up the idea of â€‹â€‹funding faculty research, Swarts had a big idea – the Swarts Family Chair in Biological Systems Engineering.

The Swarts donation will fund the endowed chair, as well as several other endowed faculty positions. The cash allocation provided by the appointed chair position will be used by Pannier and the students in his lab to drive innovative projects and explore new areas of research.

“I am extremely grateful to Dr Swarts for his unwavering and incredibly generous support of our Department of Biological Systems Engineering,” said Mike Boehm, NAKED Vice President and Vice Chancellor Harlan of the Nebraska Institute of Agriculture and Natural Resources. “Our Biological Systems Engineering program has incredible momentum, and this gift injects more energy into the essential work of its faculty, staff and students.”

Pannier said she was honored by the continued support Swarts has given her, her students and her department to fulfill their mission.

The gifts from Swarts have created a ripple effect that will reward current and future generations of Husker researchers and students. It is these direct impacts on individuals that inspire Swarts to continue supporting education and research.

â€œI see it as what can happen with what I can contribute,â€ Swarts said. â€œI support the scholarship because I believe that students who want to learn and progress deserve this extra help and inspiration. “