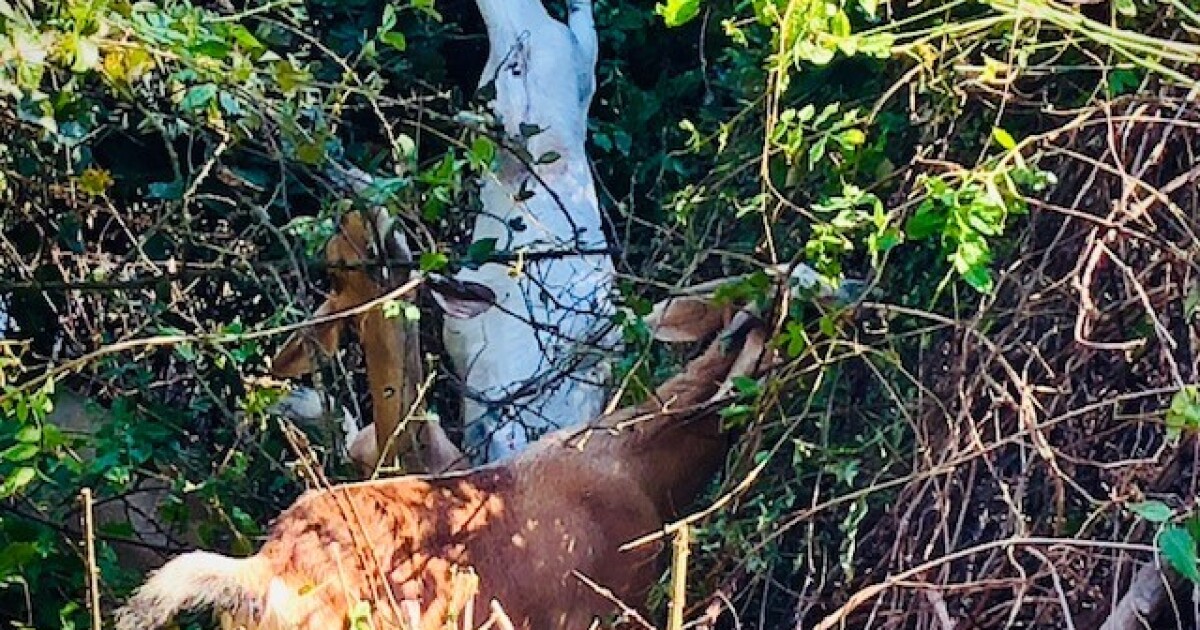 Reserve staff hired a landscaping company called RVA goats, which is based in Richmond. A team of around 80 goats and sheep help control the invasive wisteria that has invaded a few acres of the property.

“So English ivy on the ground, sheep are very good at getting that… and then goats are good at climbing up and reaching some of these vines,” explained Kristi Orcutt, owner of RVA Goats.

Hoffler Creek Wildlife Preserve executive director Ashley Morgan said it was the first time they had done this.

“About a year ago, we found out that the vines in this area had really taken over the forest and destroyed the canopy,” Morgan said.

She said they had invited experts from the state forestry department as well as city landscapers to look into the problem.

“Doing nothing is not an option as the invasive wisteria will continue to spread and cut down native trees,” Morgan added.

Hoffler Creek Wildlife Preserve was established in 1997 and is a 142-acre urban wildlife preserve.

The owner of RVA Goats says her business is busy, often hired by owners and business owners.

“We are also hired by cemeteries, especially African-American cemeteries that are historically underfunded and under-managed,” Orcutt explained. “I’m going to send the goats and in a week I see these beautiful works of art, these stone markers.”

The University of Richmond is one of their next jobs, Orcutt said. She added that goats and sheep are used to clean stream beds and also to model and demonstrate sustainability for their ecology students.

Hoffler Creek Wildlife Preserve plans to use the goats and sheep until the end of the week. Morgan said the cost was covered by a grant from the Rotary Club of Portsmouth and the Southern Virginia Community Foundation.

They hope to gain more human volunteers to help them until they can hire the goats again in the spring.

Feat-y: The Only One Green ‘Roll Bilingual online media and podcasts