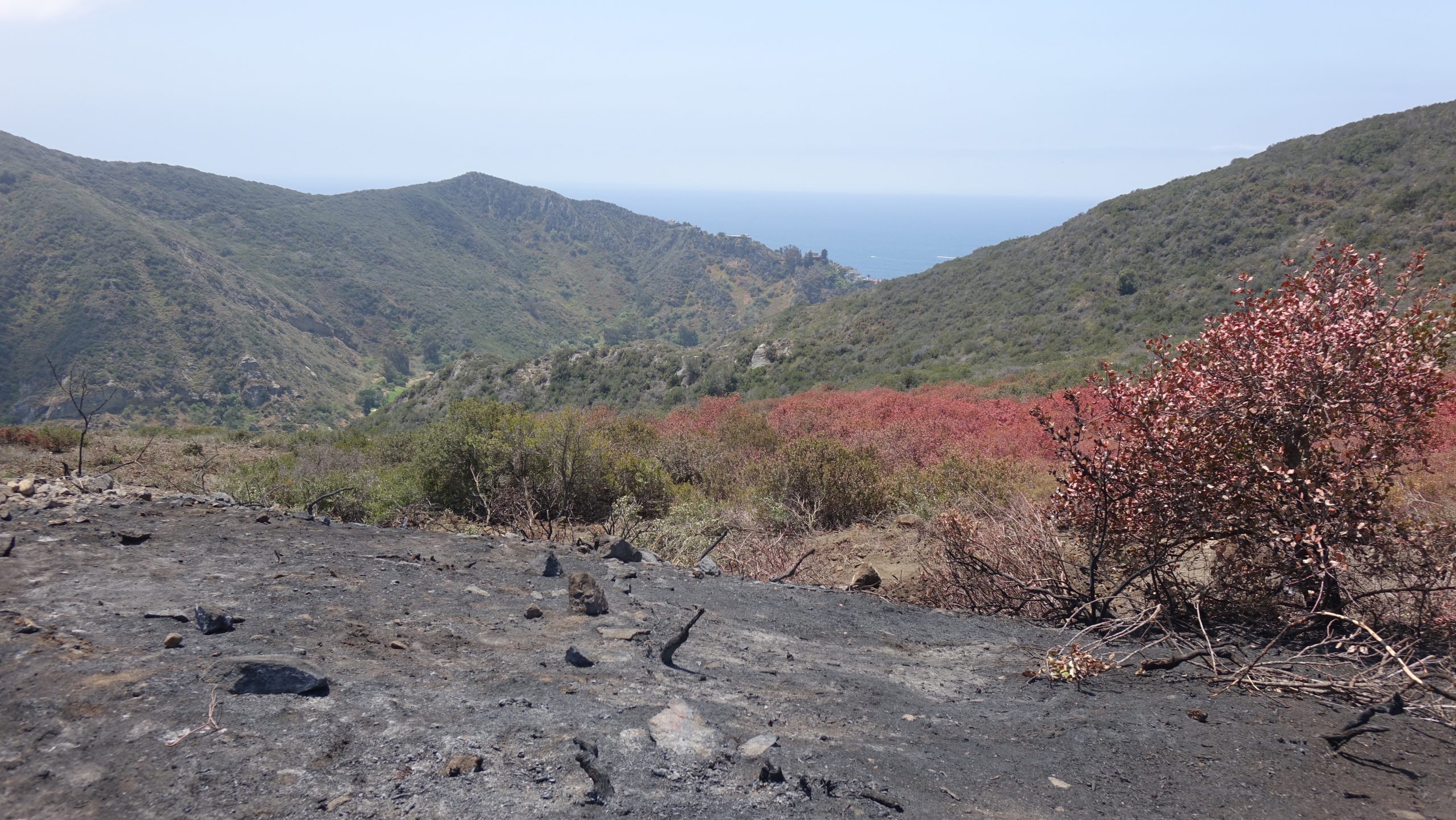 In a midday sun, red-headed vultures and crows were the only signs of life on a trail along the edge of the Pacific Horizon Biological Reserve on Wednesday.

To the south are multimillion-dollar views of the Pacific Ocean and pristine, albeit drought-choked, open spaces. Looking east towards Laguna Niguel, the full extent of the Coastal Fire devastation became apparent.

The line of fire is a twisted pile of vegetation plowed by firefighting bulldozers. A 10-foot-wide flame-retardant tape sticks to the leaves as if they’ve been painted pink. The earth and some bushes standing inside the burnt area are burned black. This is where firefighters stopped the Coastal Fire’s advance toward the Balboa Avenue neighborhood.

The Orange County Transportation Authority is another victim of the Coastal Fire, which claimed about 32 acres of the 151-acre Pacific Horizon property the agency purchased in April 2015. The acquisition was intended to offset development impacts off the highway elsewhere in the county.

County officials are still working out the extent of the damage. The first concern of emergency and land managers is whether burned hillsides are at risk of eroding or shedding debris during a major storm. Last December, residents of the canyon in the area scorched by the Bond Fire were ordered to evacuate before heavy rains caused major debris flows.

“Restoring the burnt area is an exercise in patience – really, it’s just a matter of waiting and showing up,” said OCTA spokesman Eric Carpenter. “Staff members who understand how fire restoration works say it’s best to give the land time to recover naturally because the native seeds are already in the ground.”

Coastal fire temperature could be a factor in habitat recovery time, Carpenter added. Biologists are generally concerned that when open spaces burn too frequently, resident plant rootstocks will not have time to replenish between fires. Rainfall over the next few years will also affect restoration.

An OCTA contractor would be required to cut down non-native plants, including mustard. These invasive grasses crowd out native species and create ideal conditions for future fires if left to grow unchecked.

The Laguna Canyon Foundation will be a partner in recovery efforts throughout Aliso Canyon, officials said. The non-profit organization has already been working for almost 15 years to restore sections of Aliso Creek to their natural state.

“We want to support land managers in the most effective way possible and are committed to being part of restoration efforts and any community outreach to ensure the land heals,” said Hallie Jones, executive director of Laguna Canyon. Foundation.

Pacific Horizon is home to the large-leaved crown, a plant federally listed under the Endangered Species Act as rare and threatened. It also provides habitat for the federally listed California Gnatcatcher and the state-protected Rufous-crowned Sparrow.

In 2010, the California Coastal Commission took action to permanently protect 75 acres of undeveloped land in the area known as Hobo Aliso Ridge in South Laguna. A settlement with Driftwood Properties, LLC involved the unauthorized clearing of several acres of rare habitat that is also home to the large-leaved crown.

The Driftwood property is southwest of the Coastal Fire Burn Area and the Pacific Horizon Preserve according to an Orange County Fire Authority map. It is not immediately known if there were any spot fires in Hobo Canyon.

A 1992 biological assessment found Hobo Canyon to be the most significant of South Laguna’s open spaces and among the most biologically valuable open spaces in the entire city, according to the Sierra Club Angeles Chapter.

“If it can recover on its own, we would prefer not to import plants or seeds from other sources because this region is genetically so special,” Carpenter said.

Study explores how to change societal behavior for the better