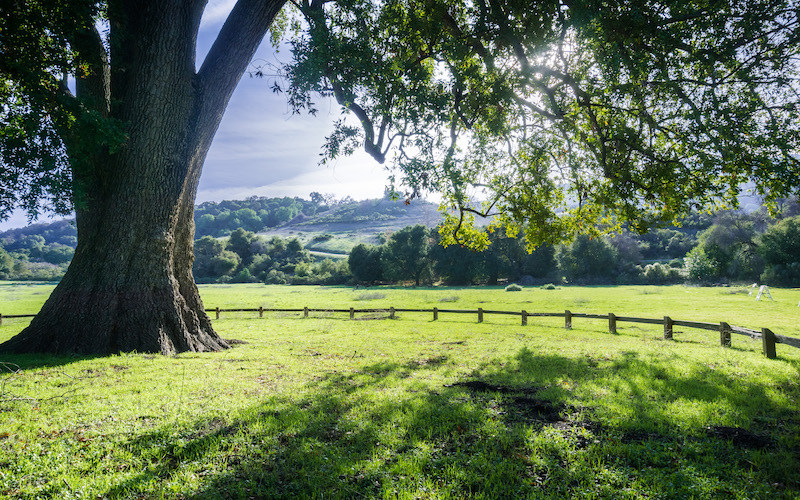 Ten acres of veg sit between the wildfire-scorched foothills of the Santa Cruz Mountains and a winding section of Highway 1 that connects San Francisco to Monterey Bay. The terrain is more linear and colorful than the coastal plain that stretches between the hills and the Pacific. A flock of small birds rush between the crops, hiding under the pointed leaves of artichokes and between the stems of tall sunflowers.

Cole Mazariegos-Anastassiou is one of three owners of Brisa Ranch. We pass a holding tank, full despite the drought, and rows of strawberries, peppers and green vegetables that the water irrigates. We reach the northern end of the field where Mazariegos-Anastassiou and his co-owners are growing their first crop in new soil, winter squash. When large plants die, he says, their broad leaves and thick stems will burrow into the earth, providing a habitat for bacteria that will help support the underground ecosystem that keeps their crops healthy.

Brisa Ranch is a regenerative farm, using farming practices designed to strengthen soil structure rather than erode it and using ecological functions for farm management rather than inputs like fertilizers and pesticides wherever possible . By planting out-of-season cover crops, not tilling the soil, and growing multiple types of crops alongside native plants, regenerative farms store atmospheric carbon in the soil and create agricultural landscapes that are more capable of growing food in an increasingly unstable climate. In regenerative farms, carbon extracted from the atmosphere creates underground habitats that keep plants healthy and people fed.

Ratan Lal, a soil scientist at Ohio State University, estimates that if regenerative methods such as no-till agriculture and cover crops were implemented globally, they could offset 15% of global emissions. Even in this most optimistic scenario, he says an immediate and aggressive transition away from fossil fuels would still be the only way to avoid the worst effects of the climate crisis. But Claire Kremen, who studies diversified agriculture at the University of British Columbia, says climate mitigation is just one aspect of what makes regenerative agriculture valuable.

“I know right now everyone is rightly very concerned about the climate, but it’s one of those very unusual things where we can do a lot of good for a lot of different systems at once.” , said Kremen. “The biodiversity system, the water system, the climate system. This multifunctionality makes it more attractive.

The multiple systemic benefits that regenerative farms bring to landscapes are rooted in the techniques that set them apart from conventional farms, whether they use chemicals or are organic. One hundred miles north of Brisa Ranch, regenerative farmer Paul Kaiser has seen the landscape and ecology of Singing Frogs Farm evolve in response to 13 years of changing farming practices. In the early years, he would spend hours plucking the beetles from his eggplants one at a time and dredging the pond at the bottom of the farm to remove the soil that had eroded. After switching to a no-till system and stopping disturbing the soil, he says many of those problems disappeared.

No-till farming, one of Ratan Lal’s main criteria for what he considers a regenerative farm, involves planting crops year after year without turning the soil in between, a process that both kills beneficial bacteria and releases stored carbon into the atmosphere. When stored in the ground, carbon does not contribute to climate change. It also forms soil aggregates, which provide a habitat for bacteria and worms, the building blocks of an underground ecology that helps grow healthy plants. After 13 years, Kaiser says he worries little about pests, weeds or erosion, a stark contrast to his first three years of farming with a tillage-based system.

Another principle of regenerative agriculture, biodiversity, is a radical departure from monoculture systems, which spread corn, almonds or strawberries over as many hectares as possible. While no-till agriculture increases below-ground biodiversity, growing multiple crops in complex rotations alongside native plants helps bring pollinators and pest-predating insects and birds into the agricultural system. Studies have shown that both intercropping and crop rotation over the seasons lead to better resistance to stress in plants, helping them to manage the fluctuations of a destabilized climate.

Kaiser uses trees and shrub hedges to bring more species to the farm, while Brisa plants 50 varieties of crops and other beneficial plants. Instead of using pesticides on their greens, whether chemical or organic, they grow sweet alyssum, which attracts a wasp with an appetite for aphids.

“The agroecological standard is about creating an ecosystem on your farm and working with what already exists,” says Verónica Mazariegos-Anastassiou, another owner of Brisa.

Kaiser saw biodiversity saving his crops. After a heat wave in March, an increasingly common weather event with climate change, a swarm of aphids covered chard it planned to bring to a farmers market. Assuming the greens were lost, he moved on to harvesting his other crops. When he returned a few days later, the aphids were gone and the dark green leaves were crawling with ladybugs. The chard crop was 15 feet from a hedge. When the heat wave hit, the aphids woke up first, but the predatory ladybugs soon followed.

Kremen asserts that biodiversity in an agricultural landscape is not limited to the variety of crops planted at one time, and also includes the number of crops planted in one location over time. Even in a monoculture system, a cover crop can increase temporal biodiversity, provide different nutrients to the soil, and help attract pollinators and beneficial insects to a farm.

When their vegetables aren’t in the ground, Brisa Ranch plants a cover crop. One of the fundamental practices of regenerative agriculture, cover crops continue to sequester carbon even when crops are not grown for sale, prevent erosion and add nutrients to the soil. Cover crops create a more porous soil it is better able to withstand drought and absorb water during floods, helping farms cope with rainfall patterns tendency to extremes. One species in Brisa’s mix is ​​a dry bean, which adds nitrogen to the soil that other plants can draw on later, bypassing the nitrogen fertilizer that is a common input on conventional farms. Creating chemical fertilizers is an energy-intensive process and one reason why conventional farms emit more carbon than they sequester. Reducing inputs and relying on ecosystem services for nutrients and pest control means emitting less to grow the same crop.

“If you can reduce the use of fertilizers and pesticides, you’re already doing climate mitigation,” Kremen said.

Kremen cites two examples from the past decade that demonstrate this trend. In 2012, a drought hit the Midwestern United States. While conventional farms suffered heavy losses, she says, farms incorporating regenerative practices like cover crops still achieved a healthy harvest. A continent away, during a long drought in Colombia’s Cesar River Valley, lean cows ate dry grass on conventional farms, while their neighbors had plenty to eat in a silvopastoral system, incorporating both trees and perennial shrubs.

Brisa Ranch is weathering its own drought, but Cole, Verónica and their partner Cristóbal Hernández are unaffected. They planted based on their available rainwater and know they have enough to get by. The trio have only been farming in Brisa for three years, but their regenerative practices are already changing a landscape long cultivated as a monoculture. At the north end of the farm, where they are growing their first crop of winter squash, the earth blows away with the wind and falls through a farmer’s fingers like sand. To the south, the soil they have cultivated for years comes in clumps, dense with carbon and fallen plant stems, ready to support new life.