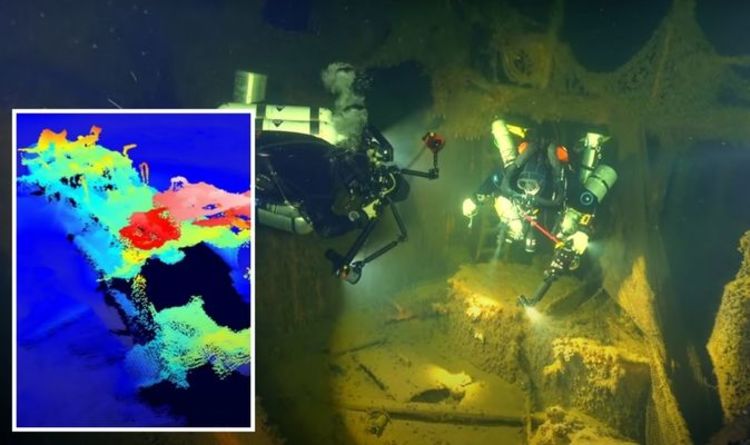 WW2: Expert on the dangers of shipwreck at the bottom of the Baltic Sea

Thousands and thousands of ships sank or were wrecked during World War II. Marine archaeologists uncover new wrecks daily, finding tons of fascinating artifacts along the way. The German tanker Franken was bombed by Russian warplanes on April 8, 1945.

It was due to supply two German naval groups when a torpedo sent the ship deep into Gdansk Bay, near Poland.

He had a whopping 1.5 million liters of fuel on board.

More than 100 wrecks have been classified by Fundacja MARE, a Polish organization that aims to protect the marine ecosystems of the Baltic Sea, as “high priority” because of the fuel levels they contain.

The Franken is of particular concern.

The sinking of the Franken presents a potentially disastrous risk to the environment. (Image: DW / Fundacja Mare (YouTube))

The Franken was sunk by Soviet warplanes towards the end of World War II. (Image: DW)

More than 70 years later, a team investigating the wreckage discovered that it was in serious danger of collapsing and releasing oil in its hold.

If that happened, it would devastate the environment and the economy of the entire region.

Dr Benedykt Hac, of the Gdank Maritime Institute, told the Baltic Daily three years ago: “Progressive corrosion means that the steel covering the hull and the interior of the ship is thinning, and the likelihood that the wreckage collapses under its own weight is increasing. “

Research in 2018 concluded that it was “only a matter of time” before the ship began dumping oil into the Bay of Gdansk and the wider Baltic Sea.

Research has also revealed that Franken is already having a negative effect on the surrounding environment.

Dr Hac added: “Field studies in the immediate vicinity of the tanker have shown that there has already been a lot of havoc in the ecosystem, and the standards for some toxic and carcinogenic substances have been exceeded even several hundred times. . “

The fuel inside is believed to be a mixture of heavy and light oil, with each type having its own devastating effects.

The surrounding wildlife could be completely wiped out. (Image: YouTube: Fundacja MARE)

Olga Sarna, chair of the MARE Foundation marine conservation group, said at the time: “We are potentially talking about the biggest ecological disaster in the entire Baltic Sea region.

“All the wildlife in this area could potentially die if the spill occurs. In addition, the economic impact will be enormous for the whole region.

Ms. Sarna explained the different impacts that different types of oil could have.

She said: “Heavy oil is the type of oil that will just go to the bottom and then spill out to the bottom of the bay, killing everything in the area.”

Ms Sarna spoke of a similar WWII shipwreck in nearby Puck Bay and the spill of it in 2005.

The oil on board, which was much less than that of the Franken, extended over 400,000 square meters.

“In this area, we have seen a 100 percent death rate of all organisms,” she said.

But that’s not the worst: “If it’s light oil, it’s more dangerous, because it will rise to the surface and then the ocean currents can move it towards the beaches.

“And since the currents in the Gdansk area usually head towards the beaches, we are talking about 80 kilometers (49.7 miles) of beaches that can be affected. If the oil gets there, the local population includes protected colonies of seals and birds, so the ecological effect will be really dramatic.

“And that will also have an effect on tourism and industry in the region. We will have to close the whole area for at least two years. “

Ms Sarna pointed out that it was now “when” rather than “if”.

Following the discovery of the ship, environmentalists launched a campaign to obtain funding for an oil removal operation from the wreck. It is estimated to cost up to £ 20million.

International teams of scientists are currently studying how to recover the oil without triggering an ecological disaster, it was reported earlier this year on Polish news site The First News.

Hunger is not a question of biology. It’s about politics