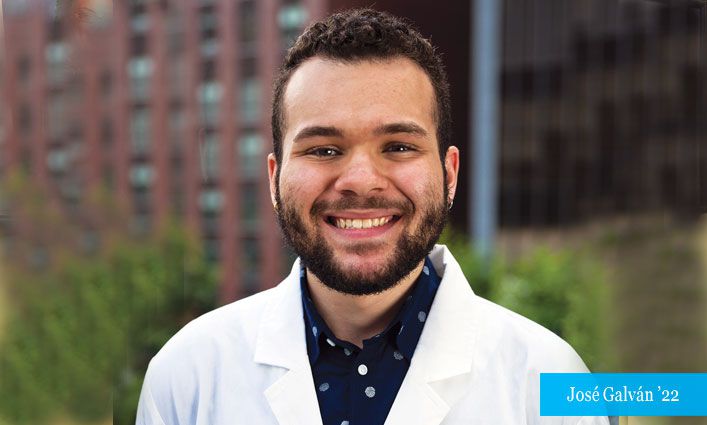 Senior spotlight: José Galván ’22 gets full scholarship for PhD in biology. at NYU

“My first semester at John Jay, I flatly failed all but one class,” says José Galván ’22, a cellular and molecular biology student from the Bronx. “Once I solved a lot of problems, I got straight A’s.” Galván received advice from CUNY Edge, joined the Program for Research Initiatives in Science and Mathematics (PRISM), and found a mentor, Professor Nathan Lents, Ph.D. “PRISM has been essential for me. It made it clear that I could be a scientist,” says Galván, who will start a doctorate. program in biology at NYU this fall.

“PRISM was essential for me. It made me see that research was something I could do. It clearly showed that I could be a scientist. —Jose Galvan ’22

How has PRISM helped shape your academic career?
PRISM exposed me to scientific workshops and research programs that really enriched my studies. Dr. Lents pushed me to apply myself to things that I would never have dreamed of applying on my own. I was able to attend scientific congresses, such as the Annual Conference on Biomedical Research for Minority Scientists (ABRCMS), and meet influential people. One summer I entered a research program at the University of Wisconsin-Madison. It was very hard work, but afterwards I felt I could fit into any lab environment or new project.

What kind of science are you most interested in?
The evolution of the genome may play an important role in many health and scientific issues that we currently face, such as cancer. In my research with Dr. Lents, we are looking for the genetic components of human uniqueness. We learned that microRNA in modern humans diverged significantly from ancient humans. We even found out which of the genes were most significantly altered; the best successes were related to brain development. It’s truly fascinating and we were honored to present it to the American Association for Biological Anthropologists.

How has Dr. Lents been a mentor to you?
He was like a surrogate father to me. I can text him anytime and he always helps me. Sometimes it’s things related to research, other times it’s just a question like, “How do I email this person?” What’s the right thing to say? Asking for help is something I struggled with growing up, but Dr. Lents changed that for me.

“I want to continue research and mentoring. I want to have my own lab and be there for students, especially students like me. —Jose Galvan ’22

What are your career goals?
I want to pursue research and mentorship. I want to have my own lab and be there for students, especially students like me. Dr. Lents and I share a lot in terms of a passion for science and being queer scientists. Dr. Lents was so understanding and empathetic. If the scientific world had a little more empathy, many more people from underserved communities like the Bronx would enter it.

Supporting the evolution of the defense and security industry through innovation