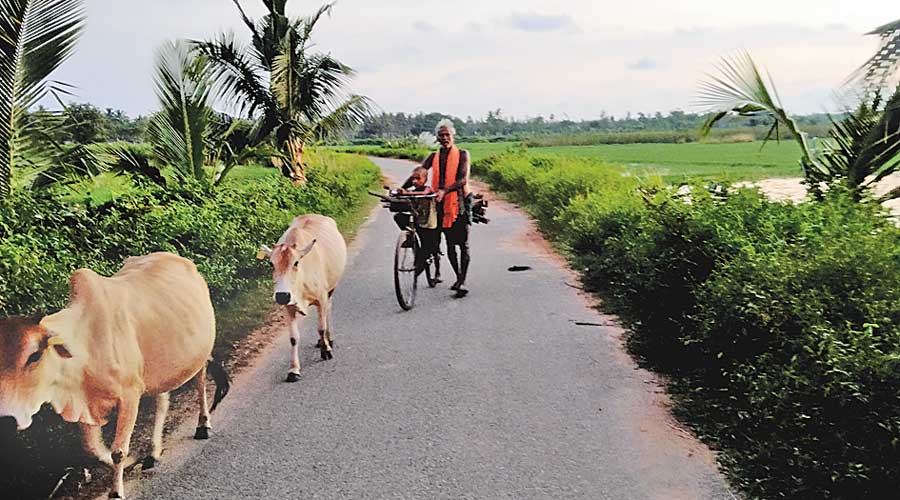 A milkman, Behera had sold 40 liters of buffalo milk to the confectioners at Brahmagiri’s headquarters. After he had milked the buffaloes in the morning, his wife took the animals to graze in the forests along the coast.

Behera has been worried since hearing about a plan to build an international airport along the coast in his mauza, Sipasarubali. The proposed airport is expected to cover an area approximately 8 km long and 2 km wide, stretching from the outskirts of the town of Puri – 14 km from the village of Balabhadra Patna – to the Bali Harchandi temple.

The region is rich in flora and fauna. Several lakhs of cashews, neem, mango and cashew trees grow on the sand dunes, protecting the town of Puri and the coastal villages from high tide and recurring cyclones.

If the airport project comes to fruition, thousands of these trees will be felled, sand dunes will be flattened, and hundreds of hectares of forests currently grazing by cattle will be absorbed by the tarmac.

“I support my family by selling milk. If the pastures are washed away for the airport, I will lose my livelihood, ”Behera said.

The livelihoods of the 140 or so families of Balabhadra Patna depend heavily on beach forests, where they not only graze their livestock, but they collect cashews in the summer and firewood throughout the year.

A state government official said the district administration has around 4,500 acres of land that could be used for the airport and its future expansion.

However, if the sand dunes and forests are to be saved by building the airport at a certain distance from the sea, the village’s agricultural land will have to be appropriated.

A three-member team from the Airport Authority of India (AAI) visited two proposed sites – in Sipasarubali and Balukhanda, near Puri-Konark Marine Drive – in June and reportedly selected Sipasarubali.

Akshya Pradhan, a 40-year-old farmer, said each family in the village earns Rs 10,000-20,000 per year by collecting and selling cashews.

“We grow rice, but not all families own farmland. People survive on forest products and casual labor, ”Pradhan said. “I have two acres of land, but I also harvest cashews in the summer. “

Others, however, look at the proposed airport with hope. Diwakar Dalai, 52, a former panchayat sarpanch, said the airport will boost the region’s economy.

“Those who oppose the airport are wrong, it will benefit us enormously. Our children will find work. Others may open shops, dhabas, taxi service, etc. Said Dalai.

Pratap Dash from the nearby village of Narasingh Patna is also in favor of the airport. He said agriculture was “no longer a sustainable occupation” as seawater entered the rice fields through the Sunamukhi River at high tide, damaging crops.

The IAA has asked the state government for land records and wind speed data for the area, as well as a map of the coastal regulatory area.

A government official said that local villagers formed an Upakula Jami Jangal Surakshya Samiti a few years ago to protect forests on government land from the theft of cashews and sand by the mafia.

The Odisha Industrial Infrastructure Development Corporation identified this area for a hotel project in 2012, but the Samiti protests scuttled it.

Laxmidhar Sahu, a farmer from the village of Barudi, said the Samiti had started to protest against the airport project.

He asked why the region needed an airport when Bhubaneswar airport was only 60 km from Puri.

“The Center is considering leasing Bhubaneswar Airport to individuals. I have a feeling that the government is also planning to take control of the Sipasarubali region and later turn it over to the rich to build hotels. We will not allow that, ”Sahu said.

Puri Shankaracharya Nischalananda Saraswati also opposed the airport project, saying it would deprive the area of ​​greenery and its livestock of food.

Ratnakar Sethi, a 55-year-old worker from Barudi, said an airport would harm the environment. He said the trees and sand dunes 10 to 15 meters high protect the land and settlements from cyclones that strike each year with winds of up to 120 km / h.

Jagannath Bastia, an environmental activist from Puri, said any damage to sand dunes and beach forests could cause erosion and endanger the town of Puri and villages.

Bastia, president of the Beach Protection Council and former member of the Odisha Coastal Zone Management Authority, recommended a strip of sand at least 2 km wide between the proposed airport and the sea. this will require the acquisition of land from the villagers.

Banning single-use plastic bags is good for the environment