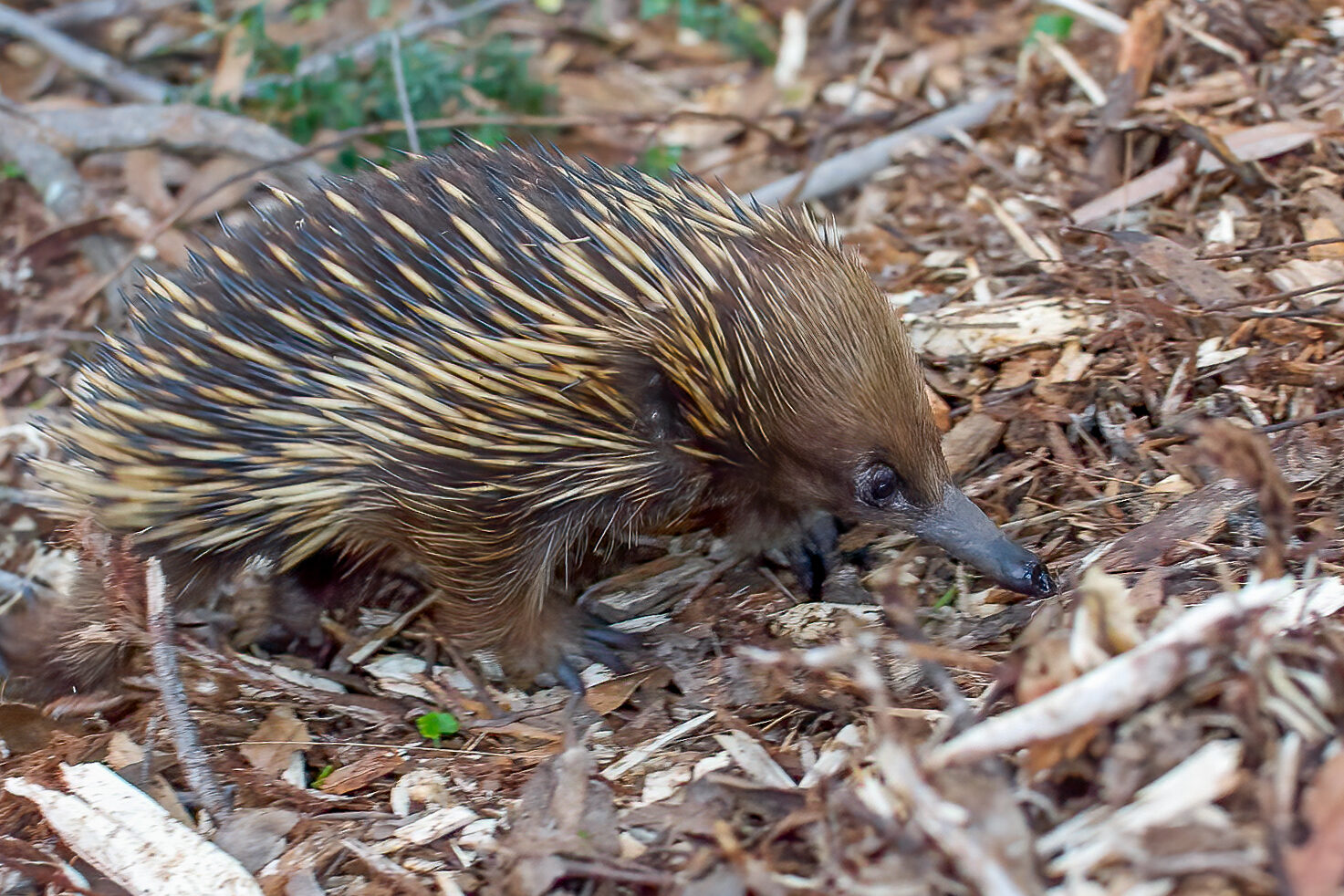 A Short-billed Echidna (Tachyglossus aculeatus), Budderoo National Park, New South Wales, Australia. Echidnas are monotremes, one of the three main groups of mammals along with the placentals and marsupials. The group also includes the platypus. Scientists believe that the monotremes were terrestrial creatures before the impact of the asteroid K-Pg and have remained so afterwards. Image credit: Daniel J. Field

The kilometer-wide asteroid that struck Earth 66 million years ago has wiped out nearly all dinosaurs and about three-quarters of all plant and animal species on the planet.

But some creatures survived, including some rat-sized mammals that would later branch out into the more than 6,000 species of mammals that exist today, including humans.

Why did these mammals persist while others perished in the devastating mass extinction that ended the Cretaceous Period? A new study suggests that terrestrial and semi-arboreal mammals were better able to survive the cataclysm than arboreal mammals, due to the global devastation of forests that followed the impact of the asteroid Chicxulub.

A possible exception to this pattern may have been the early primates, which likely resembled modern tree shrews and marmosets. Evidence from the new study suggests that primates may have maintained a capacity for arboreal habits through mass extinction, despite global deforestation.

The mammal study, published online Oct. 11 in the journal Ecology and Evolution, follows a 2018 bird study by some of the same authors who came to similar conclusions about arboreality. Both papers highlight the crucial influence of the Late Cretaceous apocalypse, known as the K-Pg mass extinction, in shaping the earliest evolutionary trajectories of today’s vertebrate animals.

The impact of the asteroid triggered a heat pulse that started wildfires around the world. Dense clouds of debris and soot were thrown into the atmosphere, cooling the planet and likely blocking sunlight, as acid rain poured in.

â€œThe large-scale devastation of forest environments resulting from the impact of the Chicxulub asteroid likely influenced the evolutionary trajectories of several groups, including land mammals. Our results are consistent with the hypothesis that predominantly non-arboreal mammals preferably survived this mass extinction, â€said University of Michigan evolutionary biologist Jacob Berv, co-lead author of the new study. .

Berv, a life science researcher in the Department of Ecology and Evolutionary Biology at UM and the Museum of Paleontology, was also a co-author of the 2018 bird paper. He studies systematics, which involves the construction and analysis of evolutionary trees revealing the relationships between organisms.

For the new study, Berv and his colleagues performed statistical analyzes of the ecological habits of modern mammals to determine whether their ancestors were more likely to live in trees than on the ground, using a process called ancestral state reconstruction. These analyzes showed, as in the bird study, that the mammals that survived the late Cretaceous extinction were mostly terrestrial or semi-arboreal.

However, while the selection signal against arboreality was strong and unambiguous in birds, it is less clear in mammals, said Jonathan Hughes, co-lead author of the study, mammalogist and doctoral student at the University. Cornell.

For example, researchers consistently found that Euarchonta, a group that included early primates, tree shrews, and soaring mammals called colugos, maintained their arboreal habits throughout the extinction and its aftermath.

A chimpanzee (Pan troglodytes) in Kibale National Park, Uganda. Evidence from the new study suggests that primates may have maintained a capacity for arboreal habits through mass extinction 66 million years ago, despite global deforestation. Image credit: Daniel J. Field

“We are reconstructing ancestral primates as arboreal in our analyzes, and I think we are the first to suggest that primates may have maintained their arboreality during the extinction of K-Pg,” said Hughes. â€œOne explanation for this finding could be forest refuges: certain environments like swamps that were less susceptible to total deforestation.

â€œAnother possible answer is that these early primates were behaviorally flexible enough to survive without trees. If they retained their arboreal adaptations, they might have been among the first mammals to return to trees after forest reclamation. “

It has been hypothesized that modern primates are resilient to rapid environmental changes due to their sociability, cognitive abilities, and dietary and locomotor flexibility. At least some of these traits and others – such as omnivorous and small body size – “may have contributed to the survival of representatives of the total primate group in the face of forest devastation at the end of the Cretaceous”, according to the authors of the new study.

Evidence from some of the models in the new study also suggests that early marsupials may have retained their tree-dwelling abilities across the K-Pg boundary.

A Virginia opossum (Didelphis virginiana), Croatan National Forest, North Carolina. Opossums are marsupials, one of the groups that may have retained some semi-arboreal characteristics since the impact of K-Pg, according to the new study. Marsupials suffered some of the largest loss of diversity and longest recovery times from the impact 66 million years ago. They were nearly eradicated from North America and are found today mainly in Australia, Tasmania and New Guinea. Image credit: Daniel J. Field

Marsupials are mammals that today include kangaroos, wombats, bandicoots, opossums, and related animals that do not develop a true placenta and usually have a pouch on the female’s abdomen. They suffered some of the largest diversity losses and longest recovery times as a result of the impact of K-Pg: they were almost completely eradicated from North America and are found today mainly in Australia, Tasmania and New Guinea.

Sloths and their closest living relatives, anteaters and armadillos, are an example of a group of mammals that started out as diggers before branching out and becoming more arboreal after the extinction of K-Pg.

Primates, marsupials and sloths may have been among the first animals to return to trees once the forests have recovered, according to the new study. These creatures “may have retained a capacity for arboreal habit across the K-Pg boundary and may have already been adapted to exploit tree niches relatively quickly as these habitats have re-established,” say the authors.

In contrast, arboreal laggards such as dormice, tree squirrels and bats independently acquired arboricultural habits until the Cenozoic, the geological era that began after the impact of K-Pg 66 million ago. years, according to the study.

A red squirrel (Tamiasciurus hudsonicus) in Calgary, Alberta. Most of today’s arboreal mammals, such as red squirrels, were born after an asteroid impact 66 million years ago, which devastated forests around the world. A new study suggests that terrestrial and semi-arboreal mammals were better able to survive the event. Image credit: Daniel J. Field

The study’s authors caution that well-preserved mammalian fossils since the extinction of K-Pg, and for the first million years since, are extremely rare and generally fragmentary. Contrary to the conclusions of the previous bird article, which were strongly supported by phylogenetic and fossil evidence, “definitive assessments of selective patterns among mammals crossing K-Pg boundaries will remain elusive in the absence of further fossil evidence.” , they wrote.

â€œThe fossil record around this period is quite scarce,â€ Berv said. â€œThe statistical models we use make the best estimates possible, but there is always a lot of uncertainty. In the absence of direct fossil evidence, our conclusions depend on the correctness of our assumptions. “

The other authors of the Ecology & Evolution article are Daniel Field of Cambridge University, Stephen Chester of City University of New York, and Eric Sargis of Yale University. Berv’s work has been supported by the National Science Foundation and the Michigan Life Sciences Fellows.