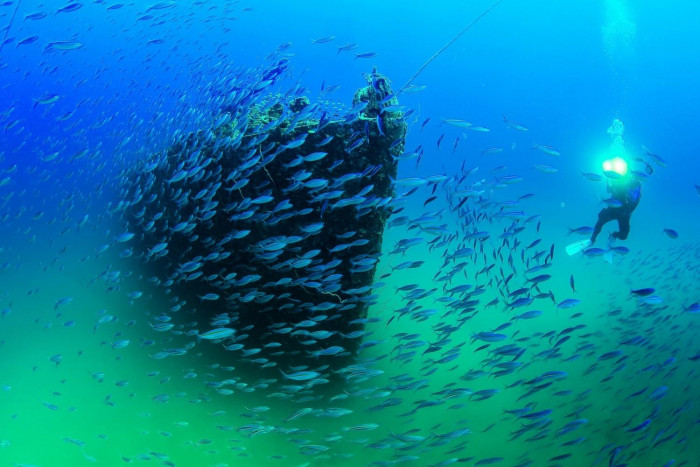 Ten years ago, two Thai battleships began their last mission. The HTMS Prab and the HTMS Sattakut were respectively assigned to the waters of Koh Ngam Noi in Chumphon and Koh Tao in Surat Thani as part of a marine ecology project.

Resting on the seabed, they still serve as artificial dive sites under the award-winning “HTMS Underwater Learning Site Project”, which is a collaboration between various agencies and supported by PTT Exploration and Production (PTTEP).

Recently, at the 2021 Gulf Sustainability Awards ceremony held in Dubai, the project won PTTEP the Silver Award in the category of best community development.

For a decade, the HTMS Paris and HTMS Sattakut functioned as artificial coral reefs while promoting biodiversity at the sites.

The project has also boosted tourism as divers and tourists travel to Koh Ngam Noi and Koh Tao, which in turn has generated jobs and income for local communities.

The history of HTMS Paris and HTMS Sattakut is interesting in itself.

Commissioned in 1947, the 50m ships were used for patrols as well as landing and rescue operations. They then served as teaching ships for sea cadets participating in navigation and weaponry courses until 2006.

Before assuming their new role at the bottom of the sea, military ships were modified for minimal impact on marine ecology, for example by repainting the hulls with lead-free paint and removing harmful materials.

This makes it safe for both small and large creatures, the latter including the whale sharks that have been spotted around HTMS Paris, especially from April to September.