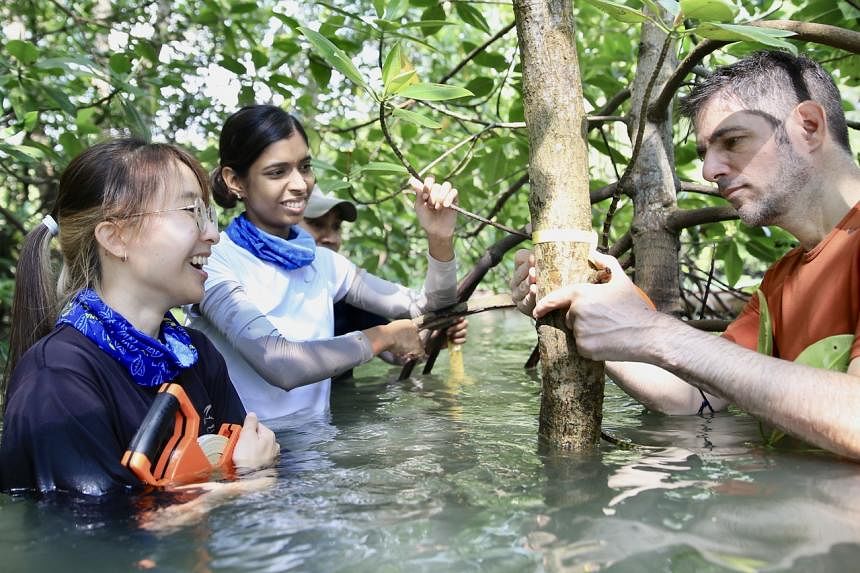 SINGAPORE – Mangroves are coastal sentinels that can protect an area from sea level rise, but only a small proportion of seedlings transplanted into an area survive.

The results of new research by scientists at Yale-NUS College, however, could help increase the success rate of these transplants.

On March 31, the team led by Associate Professor Michiel van Breugel and Professor Taylor Sloey, who has since left the college, published in the journal Restoration Ecology the results of a study on the various factors that can affect the survival of mangrove seedlings.

By monitoring the environmental conditions of more than 900 naturally established mangrove seedlings in Pulau Ubin, the team found that light is the most important factor that predicts seedling survival after establishment.

A seedling is considered established when it can produce new shoots, such as new leaves.

Professor van Breugel said: “In many studies of mangroves, hydrology is often considered the main limiting variable for seedling survival.”

Area hydrology describes the level, frequency, duration, and type of flooding in an area, among other things.

He said: “It makes sense because mangroves live in areas that are frequently flooded by seawater at high tide.”

At high tide, the roots of these mangrove seedlings lack oxygen. While starved of oxygen, seedlings also have the extra job of expelling salt from their bodies.

This is an energy-intensive process for the seedlings, which can cause them to die, Prof van Breugel said.

Under these harsh conditions, less than 50% of all naturally established seedlings studied by the team survived after six months.

After another six months, only less than 20% of them were still standing.

However, the team found that surviving seedlings enjoyed higher median sunlight than those that had perished.

Professor van Breugel said: “A lot of light is needed to maintain all the physiological machinery inside their roots to survive under such stressful conditions.”

Only a few days left to apply for 55 positions on nrsc.gov.in| Check eligibility, other details here