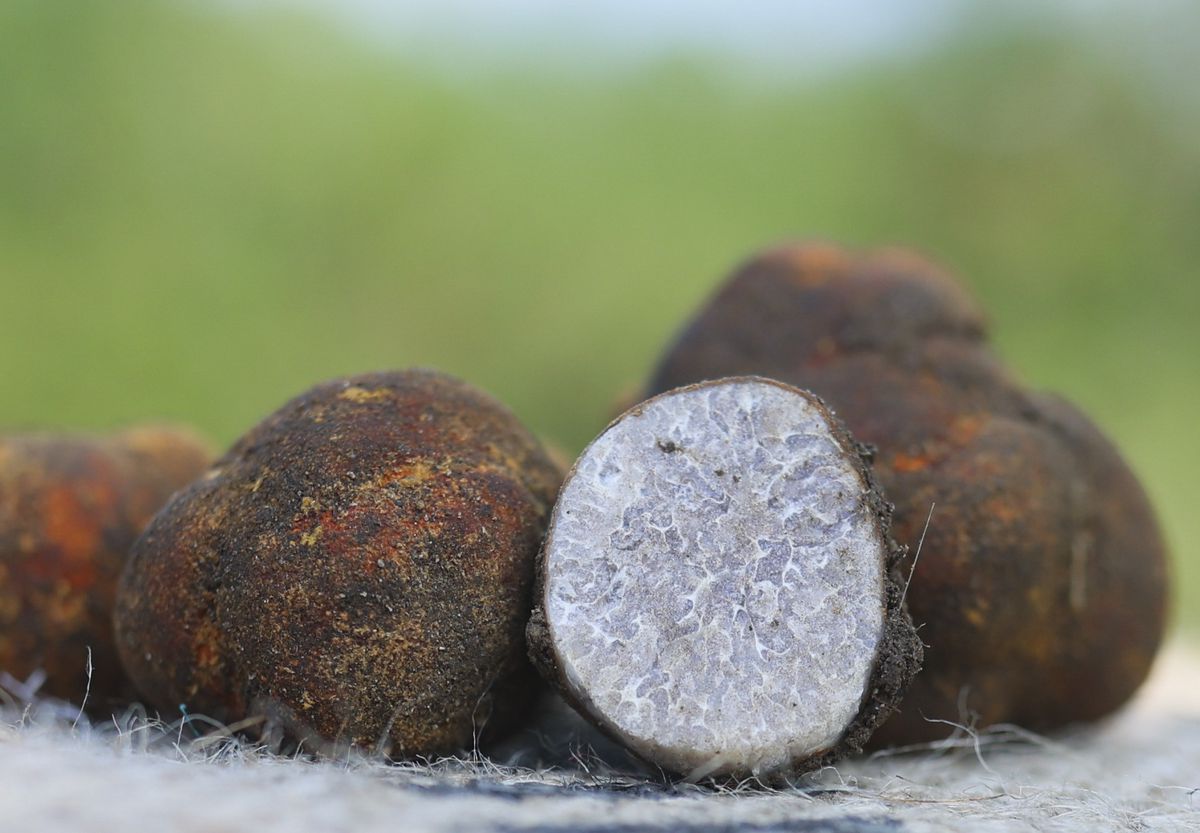 It’s been 13 years since Jérôme Quirion smelled his first truffle. At a food festival in France, he was presented with a simple egg omelet with shaved Burgundy truffle on top.

All this time later, even after becoming a truffle grower himself, Mr. Quirion still struggles to put the aroma into words – the scent wafting from that plate. “Pungent, garlicky, like cabbage,” he said before stopping.

“It smells, finally says the Quebec truffle grower, the mystery.”

The word “elusive” comes up often in discussions about truffles. They are the rich cousins ​​of mushrooms, coveted by top chefs around the world. Sometimes “elusive” refers to the rarity of the ingredient. Hidden deep underground, truffles are unearthed only by the most skilled truffle hunters, aided by highly skilled, scent-sniffing dogs.

But more often than not, it’s a reference to the aroma of truffles: the enigmatic yet fleeting scent that drives wealthy diners to shell out thousands of dollars for just a handful.

As in most fine dining restaurants – where the rhetoric often veers into hyperbole – the language around truffles can get absurd.

A famous example, from Time magazine, evoked “the piquant memory of lost youth and old loves”. The poet Diane Ackerman, in turn, recalled “the musky side of a crumpled bed after an afternoon of love in the tropics”.

But in Quebec, Normand Voyer, professor of chemistry at Laval University, has drawn up a resolutely unsexy description. His summary goes like this: “Dimethyl sulfide, 2-methylpropanal and 2,3-butanedione…”

In a study published last month, Professor Voyer’s team took truffles from Mr. Quirion’s orchard and analyzed, for the first time, the volatile compounds that make up the aroma of Quebec Appalachian truffles. This is the first time the truffle has been so carefully dissected: translating the heady aroma – and the noble language of gastronomy – into pure science.

Professor Voyer’s study is also an attempt to put Canada’s nascent truffle industry on the map. Among his discoveries: Quebec truffles share a similar profile to the most expensive truffles in the world. Even more intriguing: the Quebec varieties are quite unique and contain compounds never found in truffles before.

The results of Professor Voyer’s study may be news to many, but not to Mr. Quirion.

Since 2009, the scruffy farmer-turned-biologist has been proselytizing Quebec’s Appalachian truffles. He has spent the past decade growing them on his farm.

But Canadian truffles? “Nobody was aware of that,” he said.

Unlike the more popular black and white varieties, Appalachian truffles from Quebec (which have only been known to have originated in the province since the 1980s) are rusty brown in color. They are also smaller and generally milder in flavor.

Professor Voyer’s study found a similar profile between the Quebec variety and that of the smooth black truffle (including 2,4-dithiapentane, the flavor most often associated with truffles, and often reproduced synthetically in truffle oil).

He also found that the Quebec truffle shares the same compounds as give the Périgord black truffle (which sells for up to $4,000 per kilogram) its “malty” and “buttery” smells.

Stéphane Modat, the chef of Restaurant Le Clan in Quebec, is one of the rare chefs to have cooked with them. “Totally different from European truffles,” he said. “Taste more [like] the woods – more smoky.

Comparing the white truffle to a Lamborghini and the black winter to a Rolls-Royce, writes Jacobsen, the Quebec truffle “is the Aston Martin: elegant, sober, intensely pleasant”.

The problem is finding them.

Only a small number of commercial truffle farms currently exist in Canada: primarily in British Columbia, Ontario and Quebec. And only a handful successfully produce truffles. The vast, vast majority of truffles here are still imported.

In Quebec, there are about 25 truffle growers. But so far, only Mr. Quirion has produced them successfully. And although he sells to a handful of chefs and customers, he is focused on creating an industry – on selling trees inoculated with truffle spores to other growers.

He estimates that Quebec and Canada are still ten years away from having a significant truffle industry. But he says the potential is there.

Part of the problem is the climate. Some of the most renowned truffles, like those from Périgord, are harvested in winter, so much of Canada – and any place that experiences deep frost – isn’t ideal.

The other important factor is time. Europe, where truffles have been harvested since 23 AD, has long-established markets. Even newcomers – from countries like Australia and the United States – are decades ahead of Canada.

Indeed, truffles take an average of 10 years to grow. Most Quebec producers are still in their early years. Biologist Shannon Berch first planted her Périgord black truffle orchard at the University of British Columbia’s research farm nine years ago. She has not yet enjoyed her first harvest.

But that’s also part of the fun. “The fact that it’s not easy makes it interesting,” Professor Berch said. “Why is it so long? What should be ? What are the good conditions to try to get truffles?

“The mystery is really part of the mystical.”

But where others see mystery, Professor Voyer saw a challenge.

The professor discovered Quebec truffles for the first time while watching a local report. Soon his research team was on its way to meet Mr. Quirion, who was featured in the report.

With the help of Tofu, Mr. Quirion’s Jack Russell terrier, they unearthed three samples: raspberry-sized truffles that were quickly stored in paper bags and inside a cooler .

Mr. Quirion also has other truffle dogs on his farm. The tofu is the star. He needs to be ripped off the moment he sniffs one, before he swallows it. Another member of the team, Merguez, is a dachshund – “old and lazy”, Mr Quirion said – who will only work for the sausage as a reward.

In the lab, Professor Voyer’s team placed samples of each truffle inside vials – each sample the size of a pinch of salt. From there, they used tiny sponge-like substances to absorb the volatile molecules, then “read” the results with a gas chromatograph.

They found compounds associated with a wide range of odors: from garlic and rotten cabbage to algae.

Then there were the new compounds. This was not entirely new to scientists, Prof Voyer explained. “But,” he said, “they haven’t been properly studied for their aroma.”

The next step, Professor Voyer said, will take place in France next fall. There, his team will further analyze the compounds using a panel of “noses” – professional odorants trained to describe aromas. They will be able to prove not only that Quebec truffles are different, but also how they are different.

Professor Voyer does not see his work spoiling the fun. On the contrary, he thinks it reinforces the claims of legitimate products. An earlier study he published analyzed the chemical composition of Quebec maple syrup – a commonly counterfeited product.

“People try to oversell their products using all kinds of marketing tricks,” he said. “But science is science.”

Yet there are variables that even he cannot account for.

Human perception, to begin with. Part of the perception of flavors and smells is genetic. Some people will smell of cilantro and like it. Others might hate it.

There are also the many ways in which smell is linked to memory, nostalgia and experience. The smell of roses can evoke, for some, childhood nostalgia or a grandmother’s garden. For others a rose can smell of sorrow.

Added to this is the rapidity with which the aroma degrades. This is part of the reason why truffles are so expensive.

Mr. Quirion’s truffles were tested within 24 hours of harvest. But within a few days the smell had already changed. And a few days later, says Professor Voyer, it was completely different.

The study by Professor Voyer’s team was not funded in any way by industry. “We just thought it was an interesting, interesting scientific question,” he said.

Another reason for his detachment? He doesn’t like or like truffles. In fact, he never even had one.

But the study left him intrigued.

“It’s something I should do,” he said. “I’ll be sure to try them in the future.”