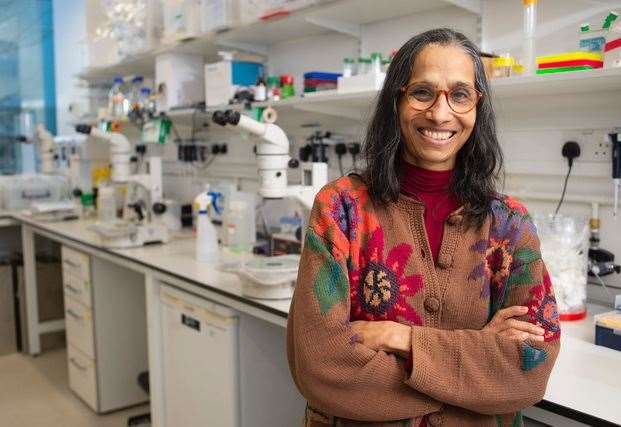 A pioneering researcher recognized for her work on tuberculosis (TB) has joined the cell biology division of the Molecular Biology Laboratory of the CRM as group leader.

Lalita Ramakrishnan, head of the University of Cambridge’s Molecular Immunity Unit, said she hoped to convince colleagues of the “awesome power” of zebrafish, which she is using as a model to study how mycobacteria cause diseases by avoiding and exploiting processes in the host. body.

Tuberculosis was the second leading cause of infectious death in 2020, after Covid-19, claiming 1.5 million lives, making it the 13th leading cause of death, according to the World Health Organization.

Professor Ramakrishnan uses zebrafish because it is a natural host of Mycobacterium marinum, a close relative of human tuberculosis bacteria.

As zebrafish is genetically treatable and optically transparent, it can be used to manipulate and monitor infection in real time.

Such work has shown the genetic basis of tuberculosis susceptibility and revealed many ways in which mycobacteria manipulate host macrophages, which constitute their main host niche.

New discoveries that have immediate clinical implications in the treatment of tuberculosis have been discovered through their use.

Professor Ramakrishnan co-authored influential articles in the British Medical Journal in 2018 and 2019 which argued that generally accepted estimates of the prevalence of latent tuberculosis, which is used as the basis for allocating research funds, were far too high .

She said: “Mycobacteria are exquisite cell biologists, having co-evolved with their hosts for millennia.

“I enjoyed the informal interactions with many [scientists] in cell biology for years and hopes to collaborate more closely to understand the cell biology of tuberculosis. I also hope to inspire my new colleagues to use zebrafish by showing them its incredible power.

Manu Hegde, co-head of the Cell Biology division of the LMB, said: “I am delighted that Lalita is joining Cell Biology. We will undoubtedly benefit from his breadth of knowledge in many areas of physiology, his contagious enthusiasm and his deep curiosity for all aspects of science.

Professor Ramakrishnan received medical training in India, before completing a doctorate in immunology in the United States, medical residency training at Tufts Medical School in Boston and a clinical fellowship in infectious diseases at the University of California in San Francisco. She conducted postdoctoral research at Stanfor before joining the faculty at the University of Washington in 2001, where she pioneered zebrafish as a model of tuberculosis pathogenesis.

She joined the University of Cambridge in 2014 in the LMB’s Molecular Immunity Unit, where she is a Professor of Immunology and Infectious Diseases and Senior Researcher at the Wellcome Trust.

Professor Ramakrishnan has remained a practicing infectious disease physician throughout her career and works as a consultant at Cambridge University Hospitals.

Despite its stated objective, the budget falls short of green ambitions