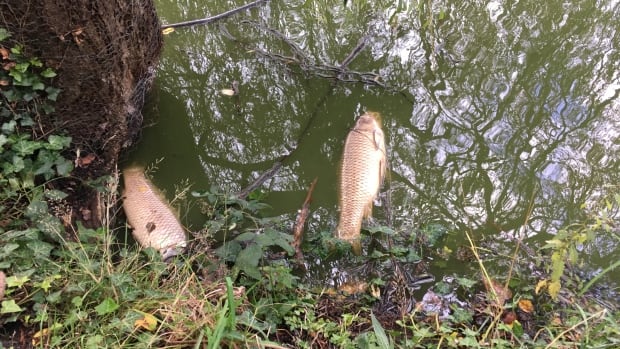 Vancouver Parks and Recreation Council officials say they have not been able to determine exactly what caused the deaths of several fish in the Lost Lagoon in Stanley Park.

Following heavy rains in mid-September, dozens of carp, an invasive bottom-feeding species, began to appear on the water surface and along the shore.

A Parks Council statement does not say how many carp died, but autopsies of some fish did not reveal an exact cause.

Authorities believe the mortality is linked to the quality of the water in the lagoon, which was originally an intertidal mudflat and has only become a freshwater lagoon. during the construction of the Stanley Park causeway in 1938.

The Park Board statement says the lagoon has low oxygen levels for aquatic life and high salinity from nearby Coal Harbor.

It also says heavy rains over the weekend of September 18, after a dry summer, may have disrupted the lagoon in a way that further reduced oxygen levels for the fish.

The park’s board says the death is a symptom of a larger ecological problem with the man-made lagoon that was created for recreational and aesthetic purposes.

“Because it is isolated, filling and now only about a meter deep (with much of the shoreline not naturalized), it is considered an ecologically poor habitat, vulnerable to sea level rise and d ‘other events,’ the statement read.

“In order to restore the area to the point where ecology is its main function, significant infrastructure, investment and time are needed,” the statement said.

The Stanley Park Comprehensive Plan is being developed in partnership with the Musqueam, Squamish and Tsleil-Waututh Nations and will be released in early 2022.