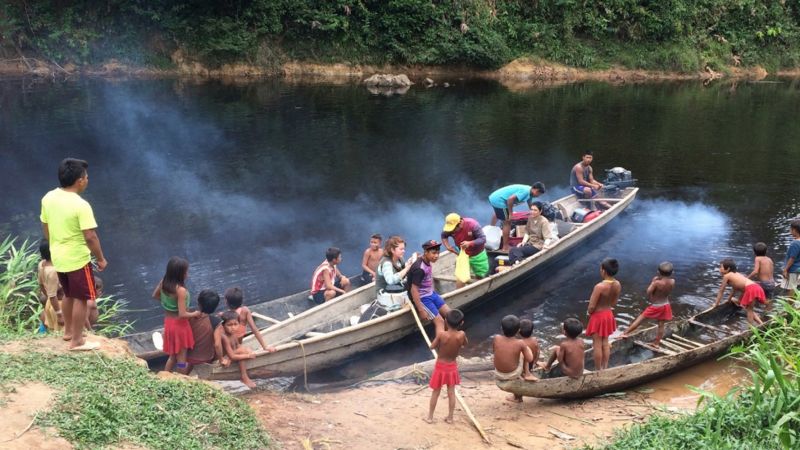 the Venezuelan microbiologist recalled the results of his research. The mouth contains a large number of bacteria, many of which are not harmful and are even beneficial. However, others can cause infections. “It’s fascinating,” she said. “You can see the urbanization gradient very clearly”: as city dwellers we embrace the industrialized way of life and live in cities; on the other hand, they adopt “many practices” which are antimicrobial.

And it is not only about hygiene habits, but also about the consumption of antibiotics, the use of antibacterial substances and preservatives. “Tin cans don’t rot just because they’re full of microbial inhibitors; in this culture of processed and preserved foods, there are a lot of antimicrobial agents that we also consume ”.

The harmful effects of ultra-processed foods on health, according to new studies

“All these modern practices seem to cause a loss of diversity (of the microbiota) and with that functions are lost. At the same time, an increase in immune defenses and metabolic diseases is associated with modern and urban lifestyles, and we believe these 2 things are causally related. We lose important functions of the microbiota and, if this impact occurs very early in life, it leads to poor development of the immune system and the metabolic system, ”she explains.

She also cautions that determining causation in humans is very complicated and that doing clinical trials with people is very expensive. So the first step was to experiment with mice.

The biologist expert points out that in remote communities, which are very small villages, there are no farming or animal production systems. And that has a direct effect on them.

“The jungle villages have their own parasites, but unless they are introduced through contact with strangers, they do not have our common infectious pathogens, the agriculture-related bacteria (virulent Escherichia coli, Salmonella ) or zoonotic viruses (influenza, HIV) ”, She wrote in her scientific article of 2016. And this observation was recalled during our conversation:“ You realize that many of our gastrointestinal pathogens, most of them, come from our meat and poultry production systems, ”she adds.

The experience of living with Aboriginal communities also allowed her to learn about the cleaning habits of some of them. “They bathe several times a day in the river; their children spend a lot of time in the river. They don’t use soap, but to be clean you realize that you don’t really need to use soap ”.

“I stopped showering and life went on,” says the preventive medicine expert and Yale professor who also wonders how and how much we bathe. Typically, when we arrive, the first few days, we use iodine: 1 drop per liter of water ”.

“On day 4, we don’t know where we left him. Instead of going to the river, which is far away, we end up consuming the water that they stored before. You know, all the children in the community play with this water; they even put their hands in it and sometimes their hands have feces, but no one has pathogens to pass on, in part because there is no E. cow coli or Salmonella; there are also no pathogens of zoonotic origin and, inexorably, we all end up drinking this water ”. “If we are going to stay there for 3 weeks, we are not going to fetch water from the river so often but nobody gets sick. It was an excellent teaching, ”she comments.

In some of the communities visited by Domínguez, “any mother dresses with her baby and goes to work. She wears it first on her chest and then behind her. These women do a terrific exercise with a weight on them and they have the correct postures. They squat down, which is a very healthy position ”.

Families “don’t sit down to eat 3 times a day like we do. They usually sit together at night and eat together to talk. During the day there is a permanent eating habit. They eat a serving of cassava, then a banana, then another fruit, and they continue to do so all day. They also have pineapples to die for, ”she said with a small smile. “If you continue to eat portions of fruit and cassava all day, then you go through this day without feeling hungry.”

Aerial photos show that the Yanomami tribe in the Amazon remains isolated from the outside world. “Then in the evening, there is a fish soup with tubers or, if there was hunting, red meat. But what they eat red meat is like a meatball, literally every week. That’s the portion and hopefully twice a week ”.

“They go hunting and, on their return, they bite the prey and what they touch in person, because they share it with the community, it is a meatball. It’s a super healthy diet. It is not a vegetarian diet, although it is truly exceptional to eat red meat. They eat fish soup every day. The pot is constantly boiling; they pour water on it, take out the fish, eat it, put in another fish, and this same process is repeated over and over again. It’s very interesting how you don’t need to use soaps or detergents ”.

Results of a social experiment

“We did an experiment and we studied ourselves, all 7 visitors. We stopped using shampoo, soap, toothpaste, but we did not give up using our toothbrushes. After that, we told them, “You can optimize health, we made a lot of mistakes. You have to understand why your diet and physical activity are appropriate, ”explains Domínguez.

“We said to ourselves: how far are we ready to give up, especially substances, chemicals? A couple of scientists, she comments, even stopped wearing their boots and went barefoot to this village. “Soon after, they ended up removing the chiggers (very small organisms) from their feet. Besides, I didn’t eat any worms, “she says. But some of her colleagues did.

“We wanted to study the following thing: If you fully incorporated into their diet and stopped using shampoos, detergents, soaps and toothpastes… How much does your microbiota change?

“We did not discuss the microbiota of all the inhabitants, but there were a couple of children, respectively 4 and 6 years old, who were the children of 2 doctors and who increased their diversity and grew closer. It was a very small study, a pilot study, but it opened up the possibility of asking: how long does the development of the human microbiota take?

And that’s what we believe; that during our first years of life, the composition of the gut microbiome is assembled and will persist into adulthood, when this microbial ecosystem reaches a state of equilibrium.

Another research study, in which Domínguez is a co-author, analyzed the microbiota of a group of individuals and found that after 3 years, children could no longer be distinguished from adults in terms of microbiota.

microscopic frozen animals brought back to life after 24,000 years | Biology