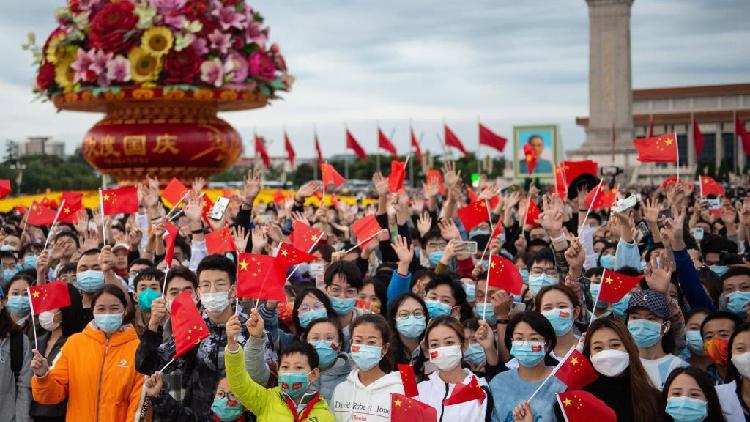 Why a happy life in China? Let’s count the paths

A flag-raising ceremony to celebrate the 72nd anniversary of the founding of the People’s Republic of China is held at Tian’anmen Square in Beijing, capital of China, Oct. 1, 2021. /Xinhua

A flag-raising ceremony to celebrate the 72nd anniversary of the founding of the People’s Republic of China is held at Tian’anmen Square in Beijing, capital of China, Oct. 1, 2021. /Xinhua

Editor’s note: Alessandro Golombiewski Teixeira is National Thousand Talent Professor Emeritus of Public Policy at Tsinghua University’s School of Public Policy and Management and Professor of International Business at Schwarzman College, Tsinghua. He is a former Special Economic Advisor to the President of Brazil and a former Brazilian Minister of Tourism and Minister of Development, Industry and Foreign Trade. He was also president of the World Investment Association (WAIPA). The article reflects the views of the author, and not necessarily those of CGTN.

In 2018, Chinese President Xi Jinping first proposed that “people’s happiness is the greatest human right”. People’s welfare has always been the goal of the Chinese Communist Party (CCP). As a professor of public policy and management at Tsinghua University, I worked, lived and traveled in China for several years, where I personally experienced and witnessed the happy life of Chinese people. Their happiness comes from China’s rapid transformation, which can be seen in the details.

The greatest thing about living in China is convenience. The ubiquitous shared bikes, rail transport, high-speed trains and airplanes can take me anywhere and anytime.

The highly developed e-commerce network helps me quickly buy and receive everything I need. Whether I want to drink tea from Hangzhou, Zhejiang province, eat snacks from Shanxi province, or buy handicrafts from Sichuan province, all I have to do is press my phone and it will be delivered to me in a day or two.

“Fast” is the buzzword of contemporary China. Since the era of reform and opening up, China’s economy has grown by leaps and bounds, leading the country to rise at an unprecedented speed.

The latest example of “China’s speed” is the construction of Leishenshan (Thunder God Mountain) and Huoshenshan (Fire God Mountain) hospitals in a short period of time at the onset of the COVID-19 pandemic. The rapid development and expansion reflects a desire for progress, development, growth of the middle class, and a maturing consumer market across society. In China, there is an inextricable link between the pursuit of “speed” and improving people’s lives.

Happiness in China is not only in the prosperous metropolises, but also in the vast rural areas. As China steps up its rural revitalization strategy, it is strengthening rural infrastructure and public services, while building beautiful villages that are liveable. Farmers who were once plagued by poverty and disease find themselves on the road to happiness.

Guilin, in the Guangxi Zhuang Autonomous Region in southern China, is a scenic tourist city known worldwide for its beautiful scenery. When I visited Yangshuo County in Guilin, I was impressed by the good blend of modern civilization and traditional culture.

Under the local government policy, the cadres led the people to create a new four-pronged rural tourism development strategy “tourism + industry + ecology + culture”. Many locals who quit their jobs have returned to do business – rafting, fruit growing, operating farm caravans, as well as repairing old houses and running bed and breakfasts (B&Bs). A number of special old houses and guesthouses have sprung up in the village, breathing new life into old houses that carry historical memories.

Relying on the tourist advantages of Yangshuo, the villagers have exploited the rural leisure tourism very well, all becoming rich and building new houses. They were also pressured by local Party branches to change their mindset, production methods, living environment and stereotypes. I’ve seen local residents leave their doors unlocked at night and they tell me that this sense of security and trust boosts their sense of well-being.

Confucius, the great sage of China, said, “What tortures people is inequality rather than shortage of manpower. What gnaws at their souls is chaos instead of poverty. The Chinese people have not only solved the problems of “scarcity” and “poverty”, but are now making great strides towards “equality” and “security”. The CPC plans to achieve basic parity in public services by 2035, and by 2050, the basic achievement of common prosperity for all will be achieved, and the Chinese people will enjoy a happier and more More comfortable. »

In 2021, the Chinese government supports Zhejiang Province as a National Model Area for Common Prosperity. Fair employment opportunities are one of the important prerequisites for achieving common prosperity.

In Taizhou, Zhejiang Province, I saw the government provide quality off-farm employment to farming villages. By introducing whole chains of non-polluting labor-intensive industries and making full use of unused land or houses in villages to build common wealth workshops, the government provides villages with projects, jobs to households and skills to people, increasing employment and incomes. of villagers. A villager in her 50s told me that she worked directly at home, earning money and taking care of her family.

In order to obtain fair employment opportunities, Zhejiang Province has also launched a high-quality agricultural cultivation program with the aim of making the “cake” bigger; improve the training of skills adapted to the employment of migrant workers and the training of new trades and new industries. The program focused on farmer entrepreneurship, which guided farmers to join various companies to cooperate in entrepreneurship. This encourages the growth of work-sharing and multi-channel flexible employment, and farmers are more likely to be employed in domestic services, elderly care and other fields. The above measures have helped establish a long-term mechanism to address the lack of opportunities and resources for low-income groups.

These stories are played out every day in various parts of China. I met different people but they have the same smiling faces in different provinces like Yunnan, Jiangsu, Fujian, Guangdong, Hebei and others. I learned during this time in China that development can be achieved with social and economic inclusion. The Chinese people have driven China’s rapid rise and reaped the benefits. They will gradually close the quality of life differences in the future. This will hopefully lead to happier and better lives.